Flowers are not only popular on balconies and meadows, but also as tattoo motifs. Whether as a vine across the back, side or belly or as a decorative highlight on the ankle, there are no limits to the imagination when it comes to flower motifs. They are not only timeless but also what you probably didn’t know yet: Flowers tattoo all have different meanings.

Flower tattoos are versatile. Depending on which plant you choose, there can be very different meanings behind the motif. There can also be very different styles of tattooing them, like realistic tattooing, traditional style or new school tattoo style for example.

We explain the symbolism behind popular flowers for tattoos so you have an inspiration for your next tattoo. Continue reading and you will find out everything about flowers tattoo meaning.

And…let the flowers do the talking – on your skin!

The History of Flower Motifs

“Say it through the flower” – the expression that means to express criticism carefully has its origins in the language of flowers. The corresponding script already existed in the form of Egyptian hieroglyphics.

The language of flowers only became popular in the 18th century, when the writer Lady Mary Wortley Montagu reported in her letters about “communicating with flowers”. Eventually, people gave each other flowers to convey messages. Mainly because expressions of love were rather frowned upon, especially among young and unmarried couples.

The meanings of the individual species are still known today, even though it is no longer necessary to pass on secret messages of love. If you know which flower stands for what, you can add even more depth to your tattoo.

Types of Flower Tattoos and Their Meanings

In the beginning, it was only a few fancy flowers, such as roses or lotuses, that had a special feature or were particularly beautiful. In the meantime, almost all flowers or blossoms have been attributed a symbolism or meaning.

To give your floral tattoo even more depth, you can choose a flower according to its meaning. Or, of course, simply because it looks pretty. The most popular are: 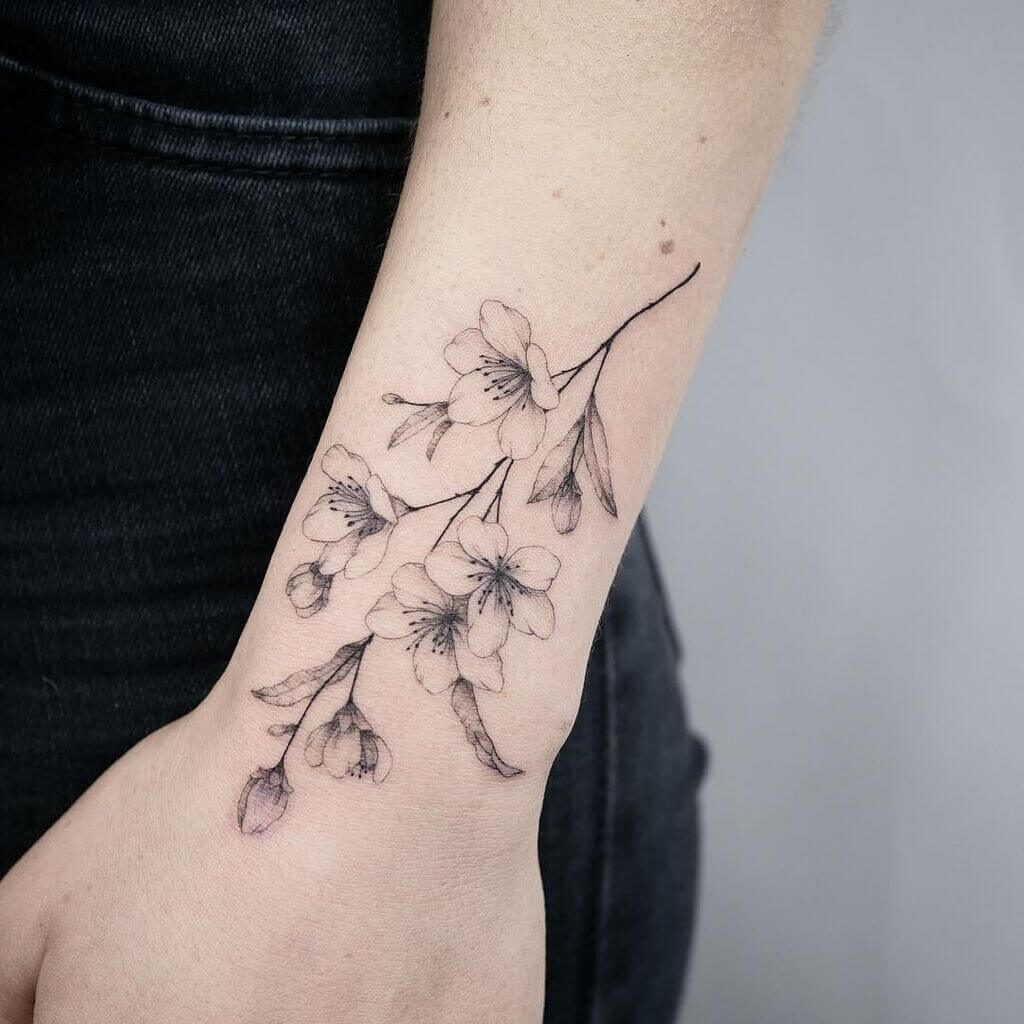 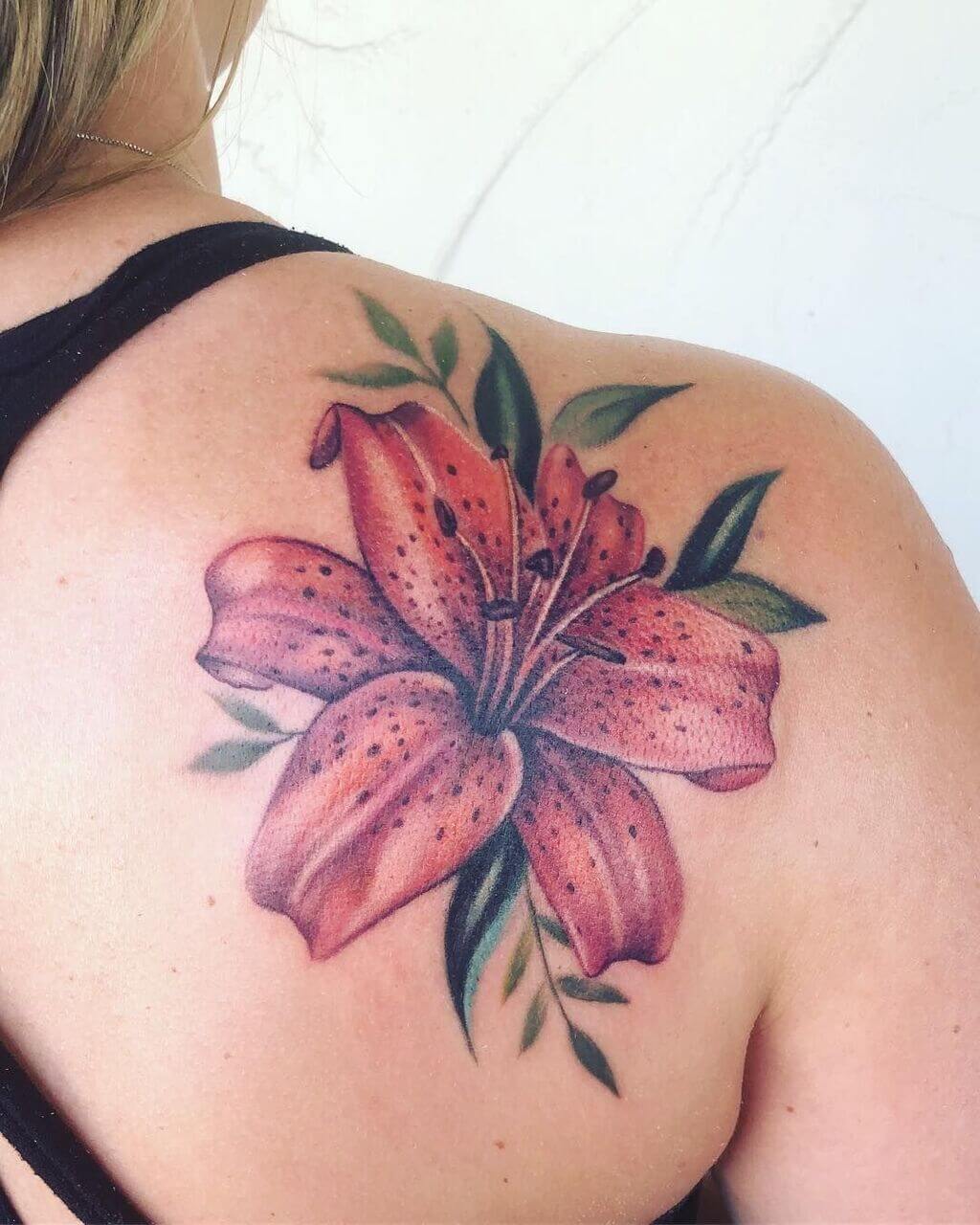 Lily tattoo meaning: the lily can also have very different meanings. Among other things, it can stand for femininity, love and transience. But above all, it is simply a real eye-catcher. 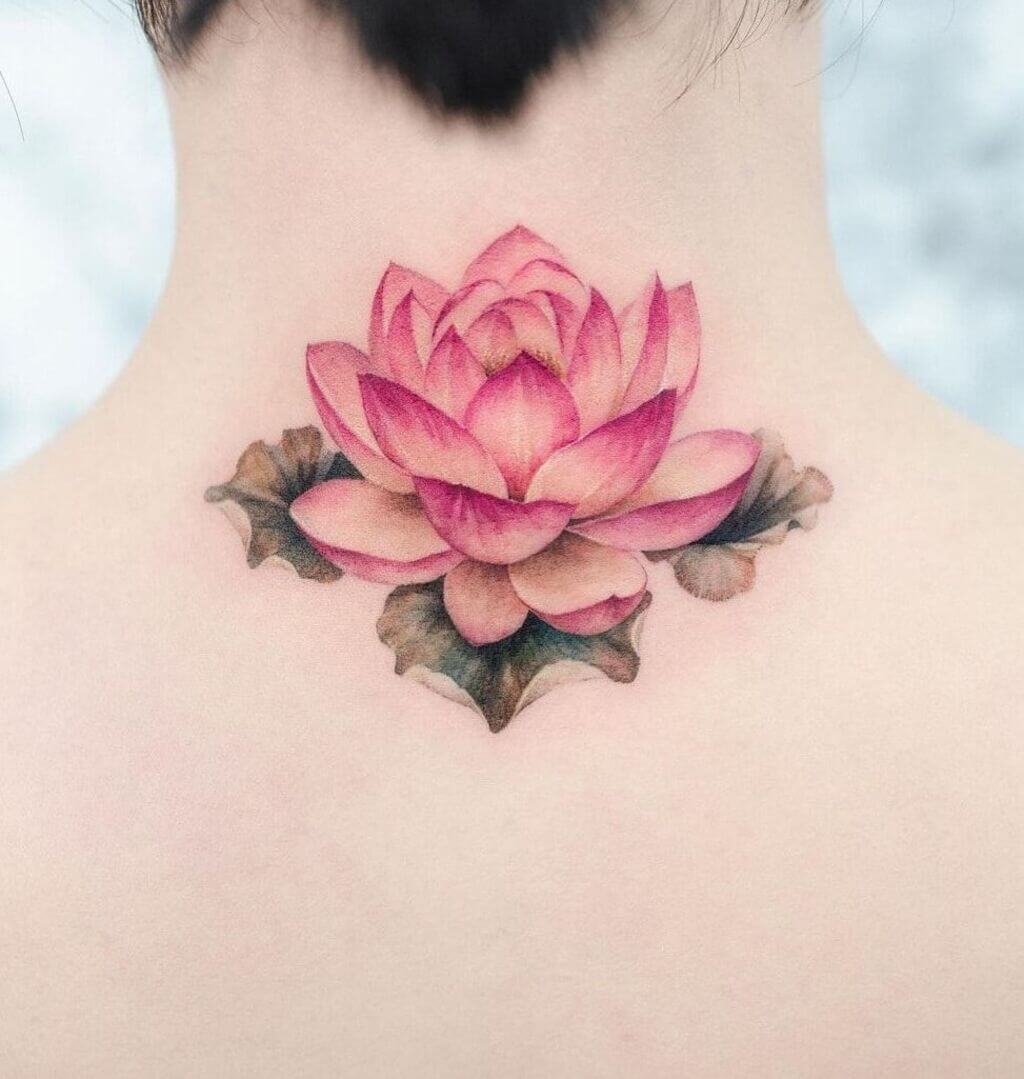 Lotus flower tattoo meaning: the lotus blossom can stand for love and harmony, but is also a symbol of the Buddhist faith, especially for the path from the human to the divine. 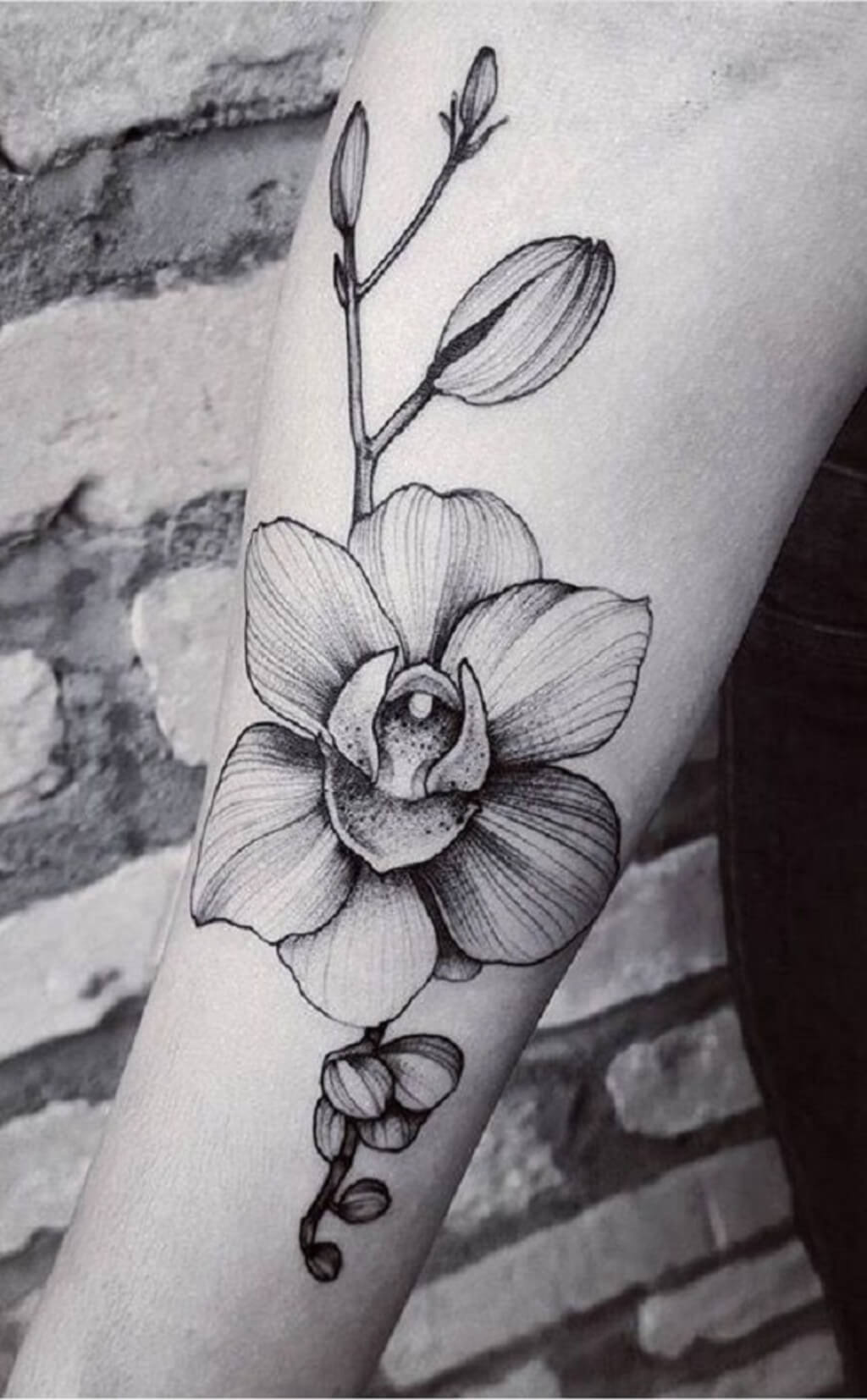 Orchid tattoo meaning: well, do you also have an orchid as a houseplant on your window sill? You are far from alone because orchids are extremely popular. Among other things, they represent youth, grace and uniqueness. 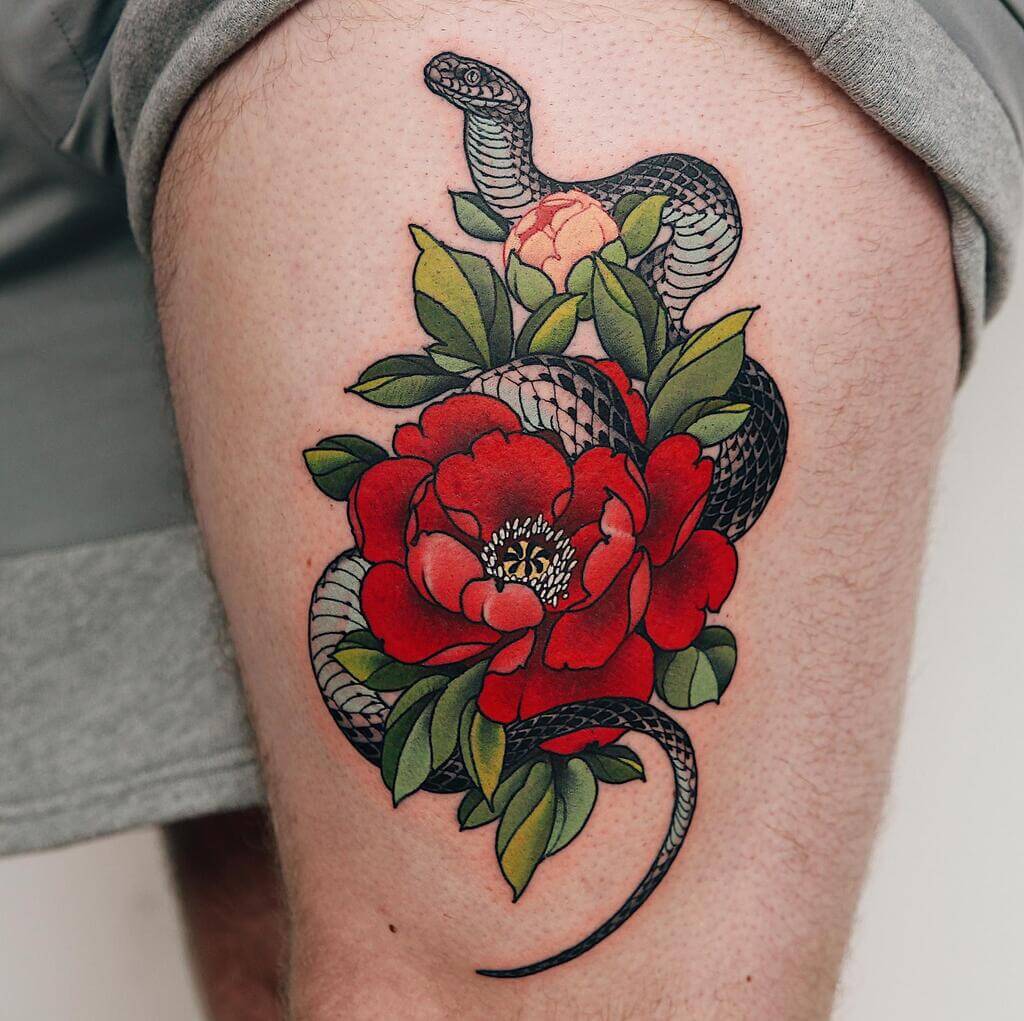 Peony tattoo meaning: The peony is an important plant, especially in Asian culture. It stands for beauty, wisdom, luck and wealth. It is often combined with other Chinese or Japanese tattoo motifs, such as pandas, dragons, geishas or kois. 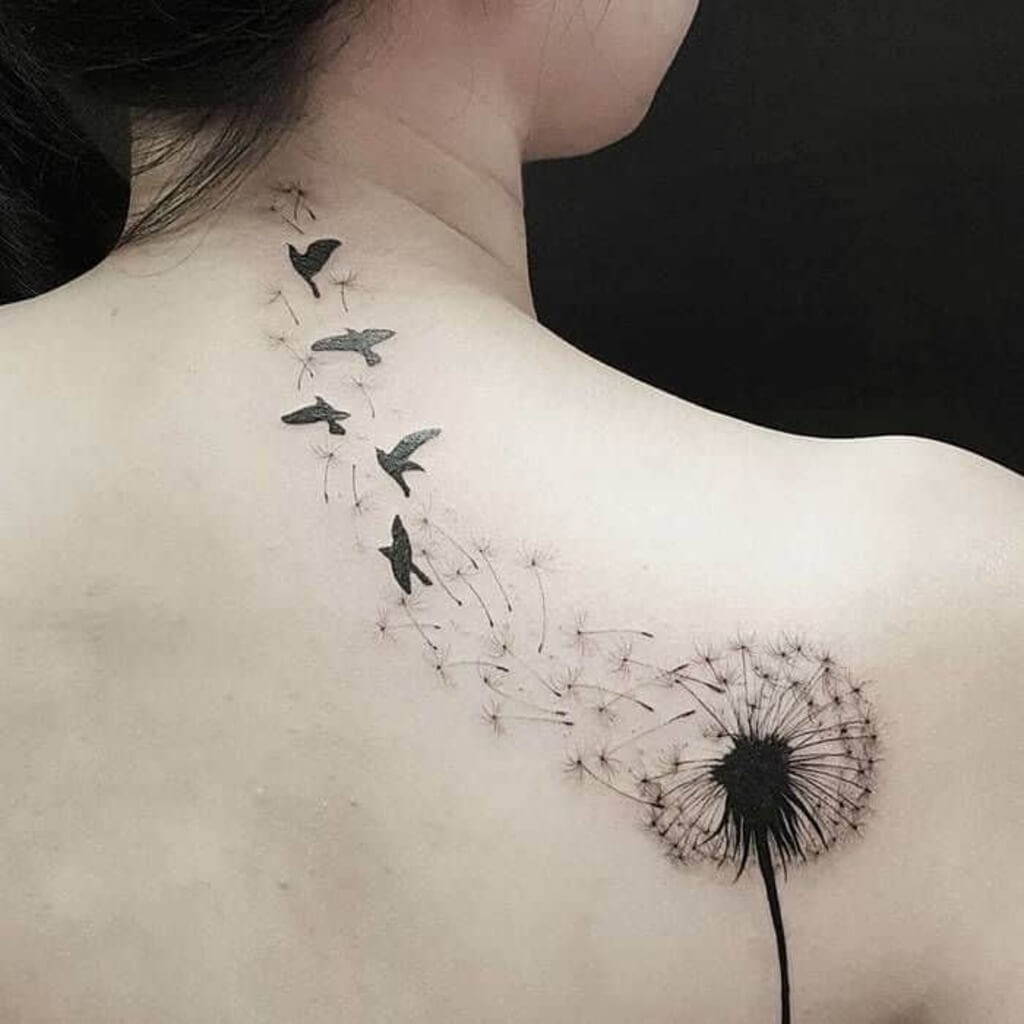 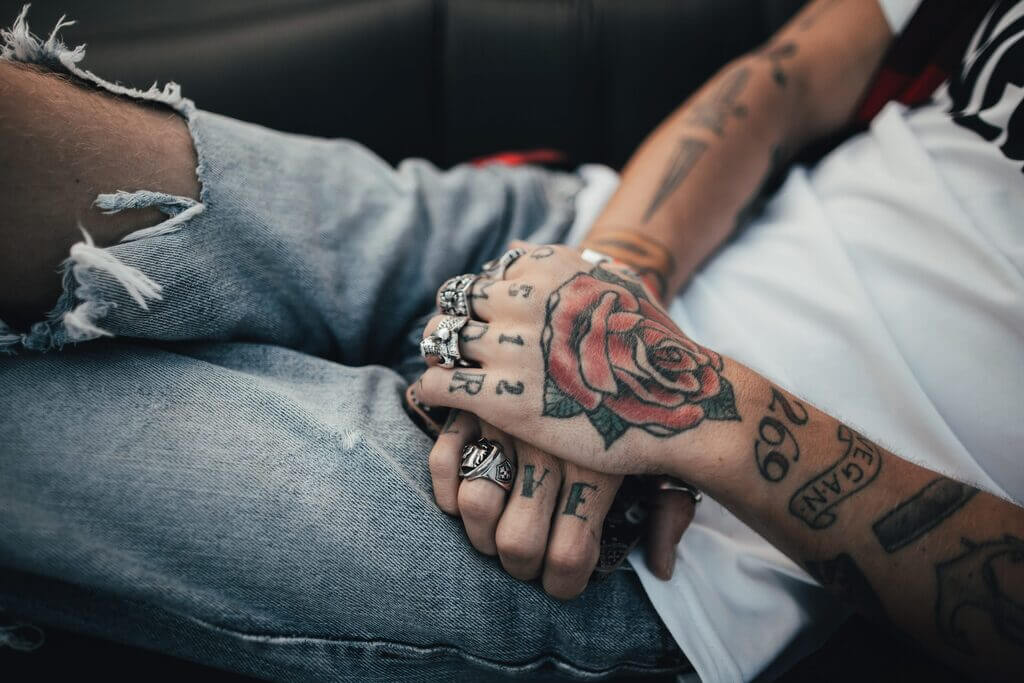 Rose tattoo meaning: the rose tattoo is probably the classic flower tattoo. Depending on the shade, they can have different meanings. 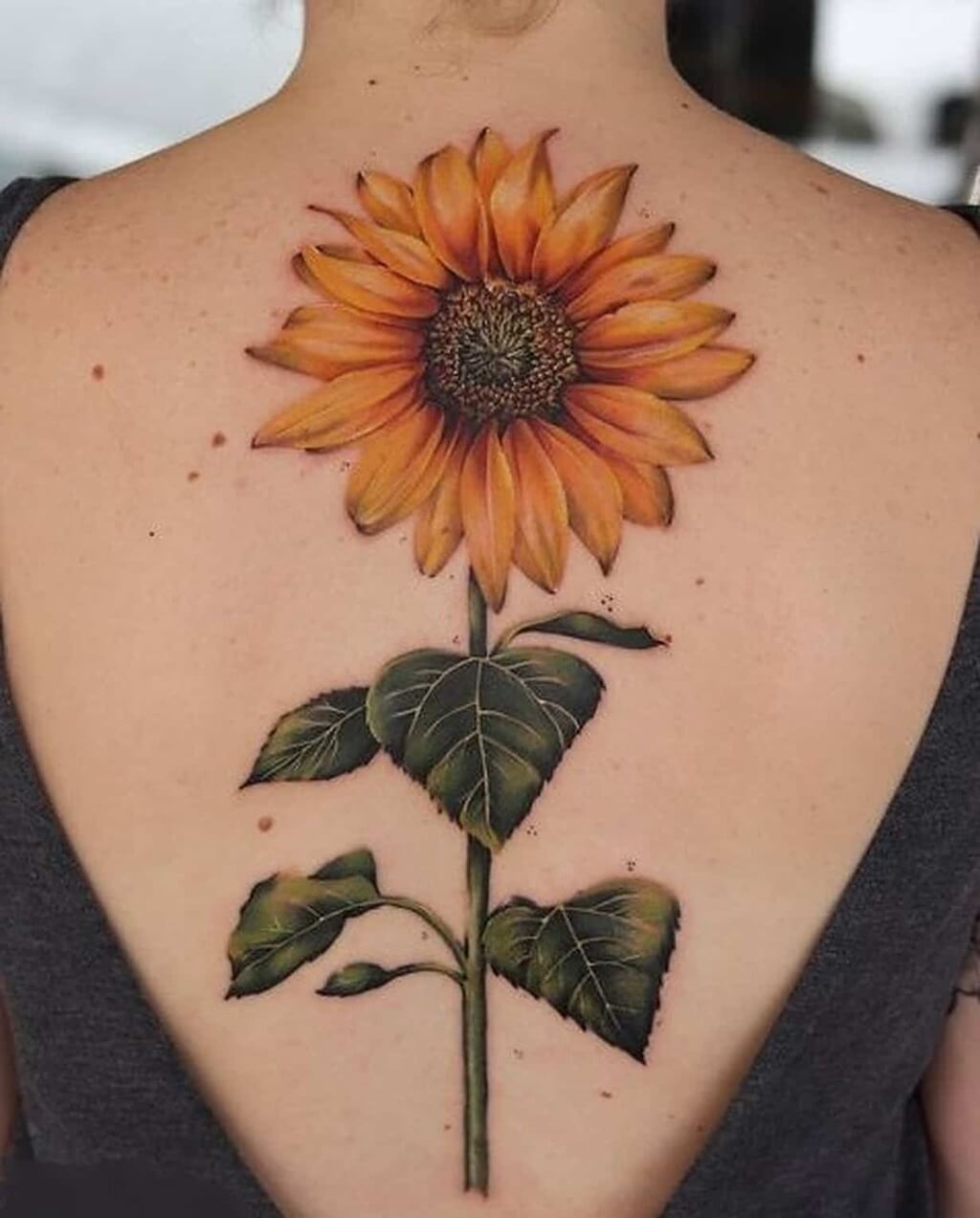 Sunflower tattoo meaning: sunflowers put you in a good mood and are symbolic of a positive attitude to life. In Chinese culture, they are also believed to bring good luck, like a shamrock. 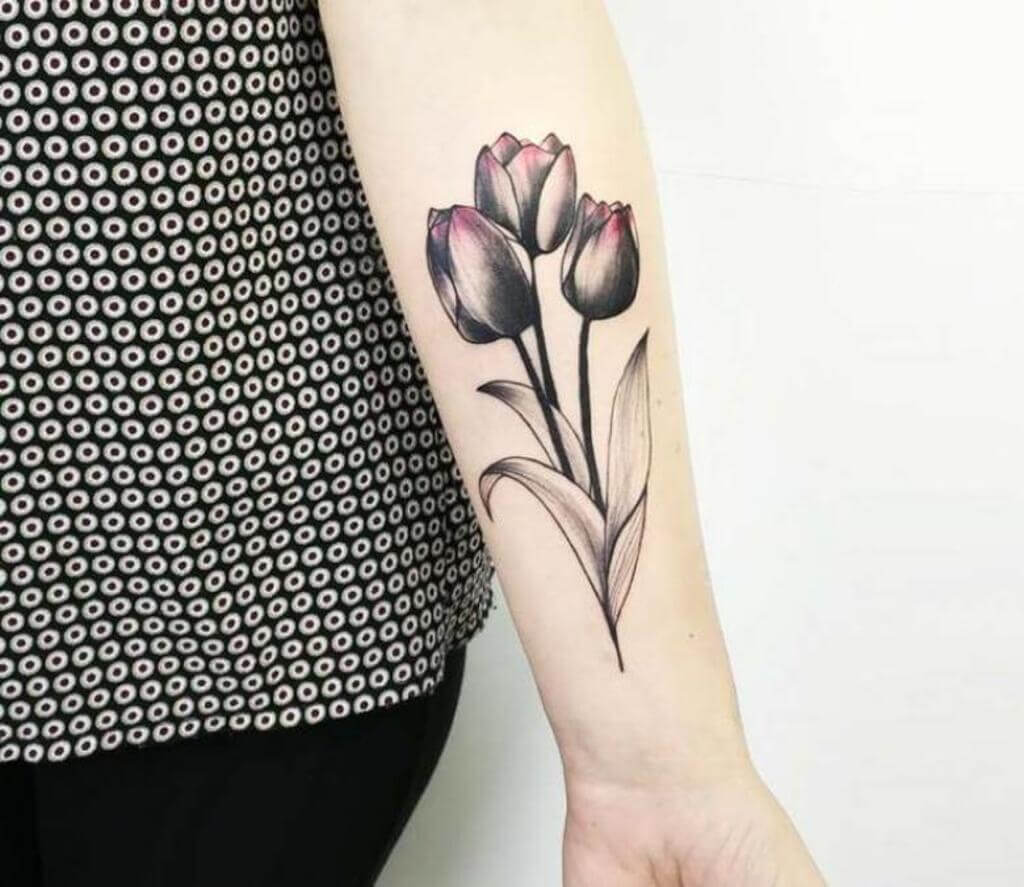 Tulip tattoo meaning: Tulips make you long for spring. They stand for the pursuit of success, for beauty and closeness to nature. 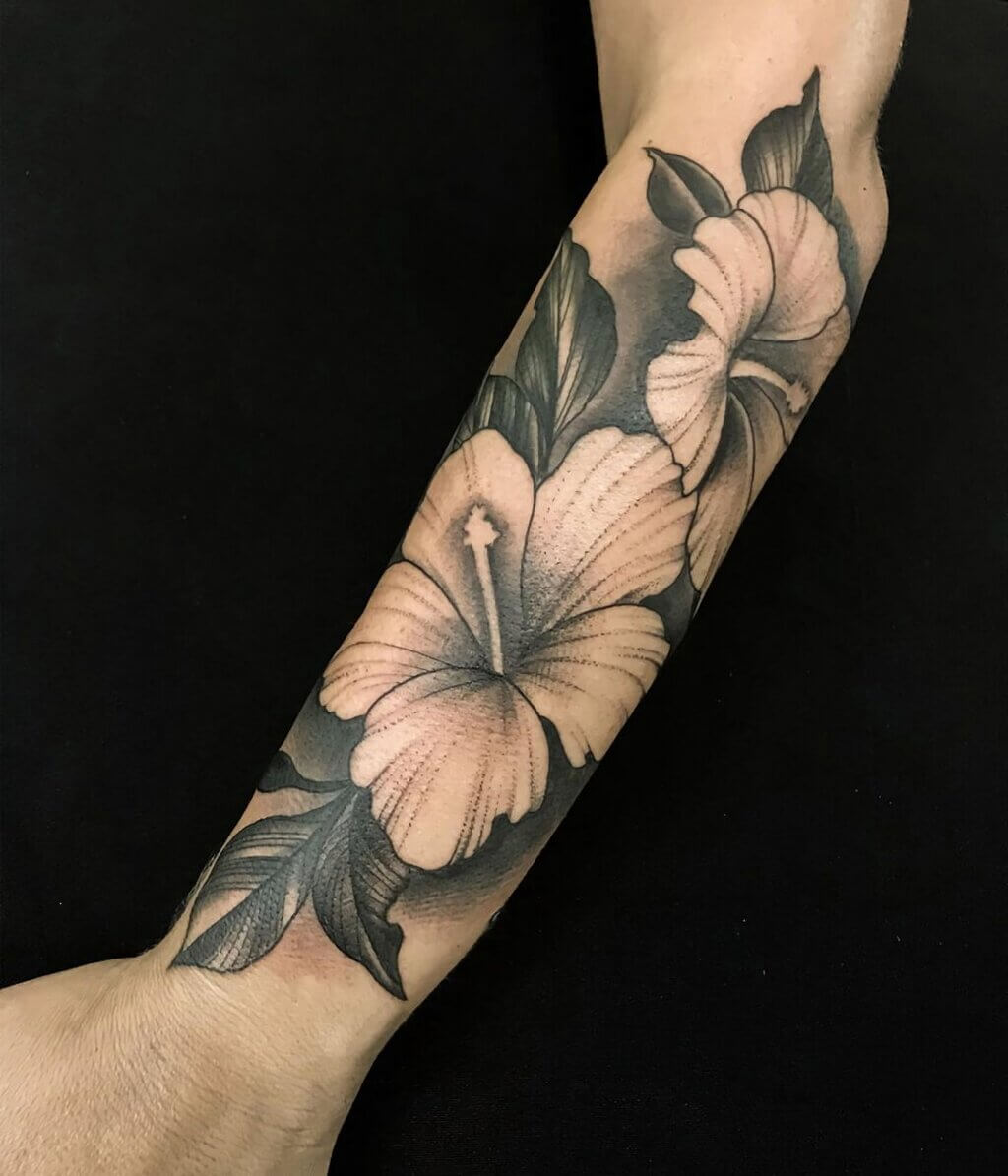 Hibiscus tattoo meaning: the hibiscus flower spreads a tropical feeling and makes you long for sun, sea and holidays. It can stand for wealth and determination, but also for particularly strong stamina. 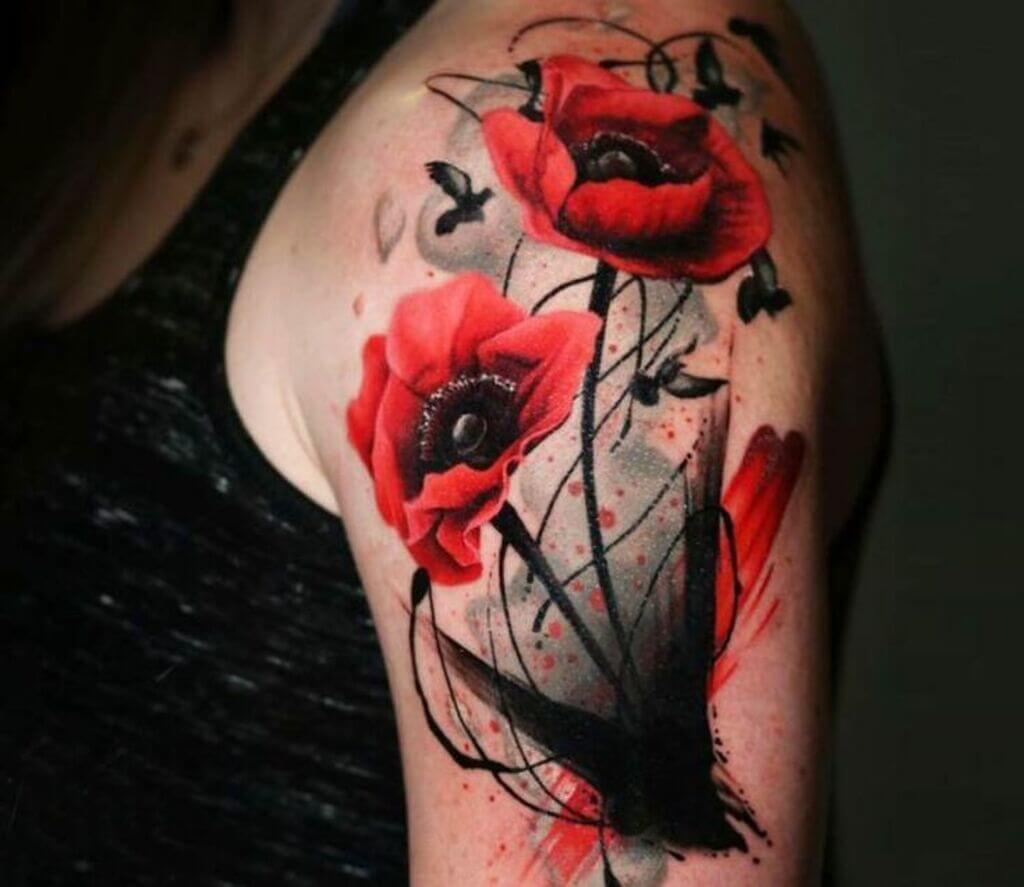 Poppy tattoo meaning: poppies can symbolise beauty and success, but can also stand for the memory of a deceased person. The intense red colour makes them a motif that is not easily forgotten. 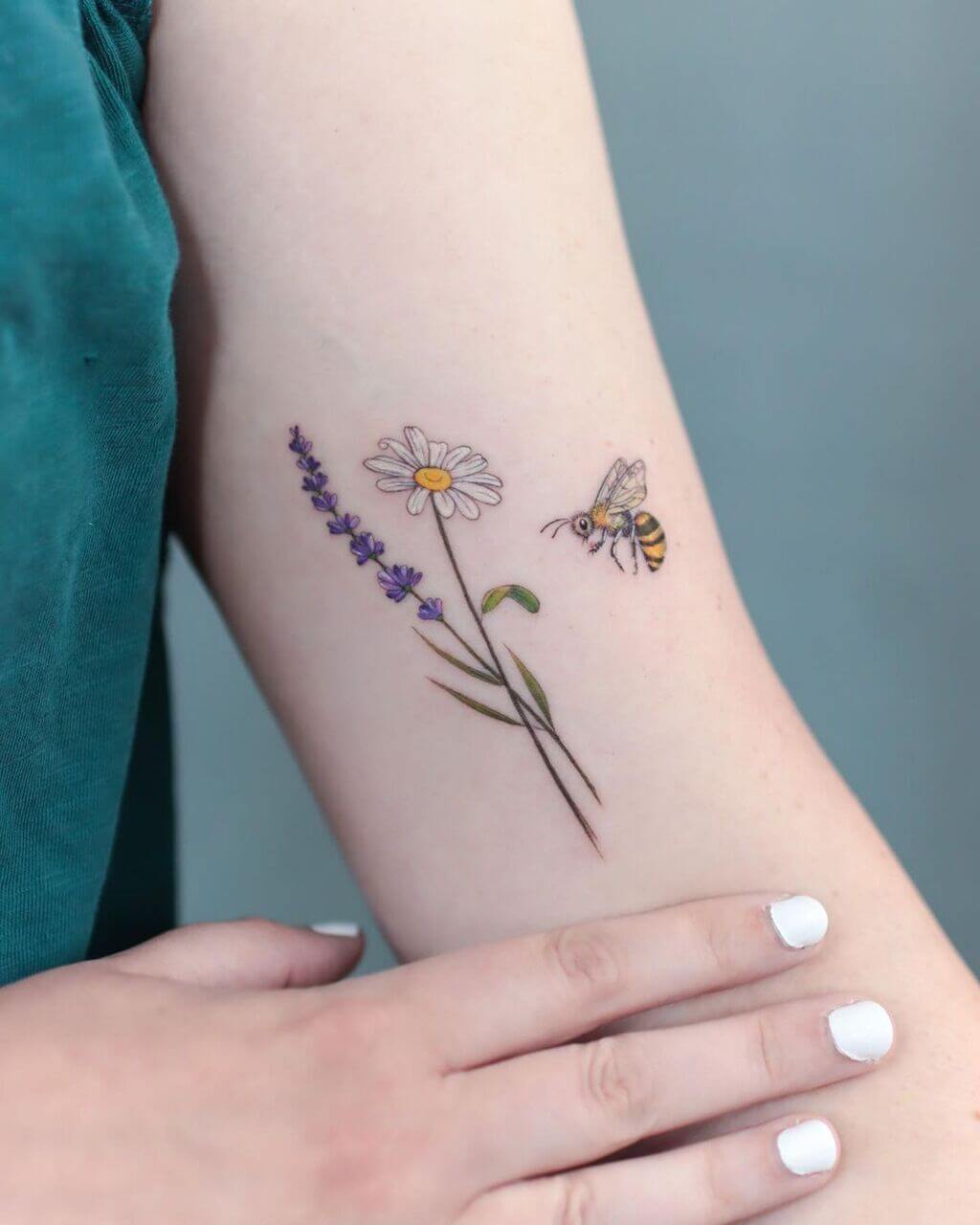 Daisy tattoo meaning: those who have daisies tattooed want to document their childlike innocence. 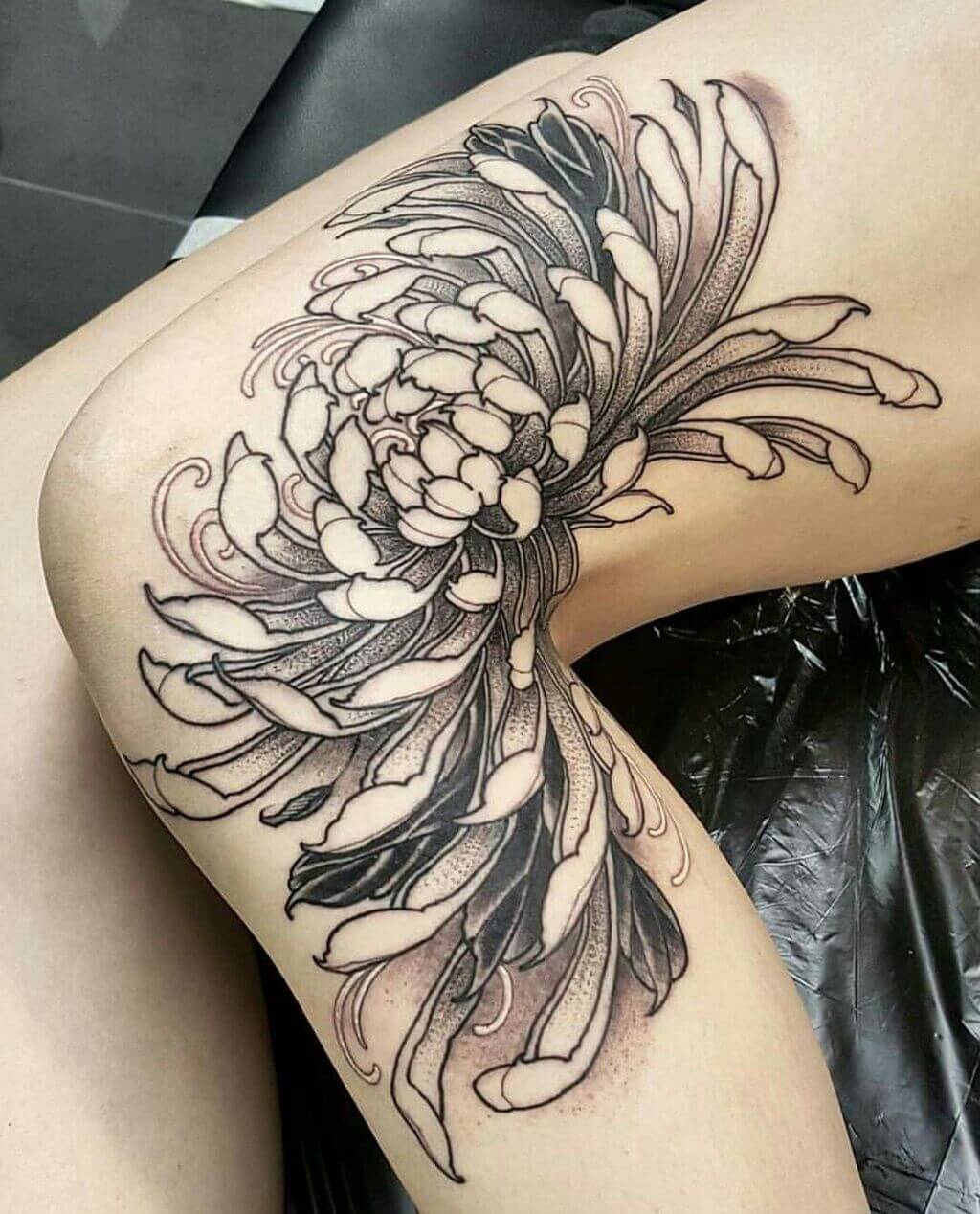 Chrysanthemum tattoo meaning: Chrysanthemums stand for long life and in love, it means my heart is free.

The meaning of the yellow chrysanthemum is superficiality. The chrysanthemum in red symbolises intimate love, similar to the red rose or red carnation. Just as white flowers stand for purity, the white chrysanthemum stands for sincerity.

Meaning of the Flower Colours

Flowers in brown stand for down-to-earthiness, naturalness and security. Brown is one of the earthy tones that are especially fashionable in autumn.

Flowers in white stand for innocence, purity and sincerity, but also death. White flowers can have different meanings depending on the occasion. They can have a religious meaning or stand for immaculateness or purity. That is why brides usually wear a white dress for their wedding.

Generally, however, they are called death flowers, just like the hydrangea, which is a death flower not by colour but by flower type.

Flowers in yellow stand for joie de vivre, energy, warmth and carefreeness. In a relationship, however, yellow is also associated with jealousy. Yellow is the colour of the sun, which in turn gives you joie de vivre and energy to get through low blows.

Flowers in green symbolises hope, new beginnings, life, naturalness and vitality. Just think of the green of the leaves, whose growth has a new beginning after every winter.

Flowers in orange stands for endurance, warmth, optimism, lust for life. The flower colour orange is comparable to yellow but goes much further in its meaning. In Buddhism, orange is considered the highest level of enlightenment. That is why Buddhist monks often wear robes in an orange hue.

Flowers in pink have the meaning of friendship and intimacy. They convey sensual, romantic and gentle feelings.

Flowers in purple – purple means warmth, individuality and dignity. But violet is also the colour of the spiritual and mystical scene.

The Right Body Part for Your Tattoo with Flowers 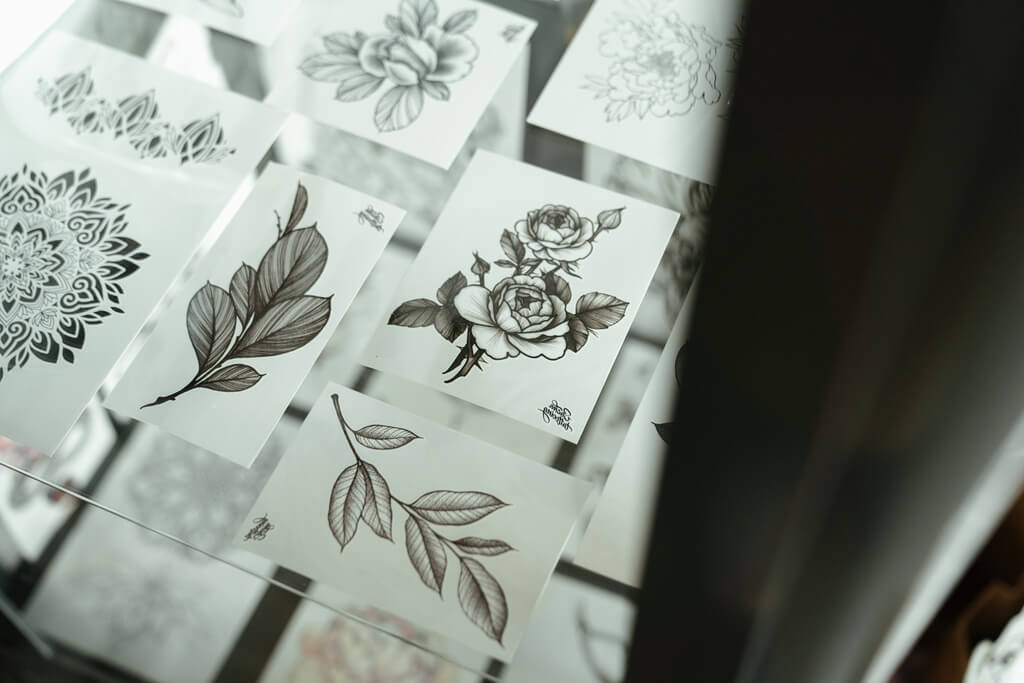 In addition to the right motif for your type, the right place on the body is also important. For example, if you decide on a tendril flower, it will certainly not look as good horizontally across the back as vertically on the arm.

Of course, the position of the tattoo is a matter of taste, but it makes sense to talk to the tattoo artist about the desired location beforehand.

Whether it’s a rose, tulip or carnation, you’re spoilt for choice! The beauty of flower tattoos is that they never go out of fashion and you can wear them on any part of your body. You can also experiment with different styles of tattoos and this does not mean that you cannot get an amaryllis tattoo because you do not want to appear proud. Or that you can’t get a lotus tattoo just because you have nothing to do with spirituality.

The meaning of the flowers is interesting, but not binding. And only very few people think about the meaning of a flower tattoo when they see it. So don’t be afraid of flower tattoos just because they might mean something. There are no limits to your imagination.