Medusa has the greatest hair in Greek mythology, as everyone knows. Because of the rich history surrounding the character of Medusa, this Medusa tattoo will look fantastic on the body. For those of you who don’t know, Medusa is a highly revered character and part of Greek mythology, and many people regard her as a symbol of femininity and freedom.

Furthermore, according to Greek mythology, the stunningly beautiful Medusa was a gorgon who had a love relationship with Poseidon, the Sea God. Until the goddess, Athena discovered their secret rendezvous at the Temple of Athena.

In this way, Medusa tattoos have become popular and have become a huge deal those days. It was well said by Laurie Notaro- “Books are to me as homemade tattoos are to an inmate. Can’t get enough of them.”

What Does a Medusa Tattoo Mean? 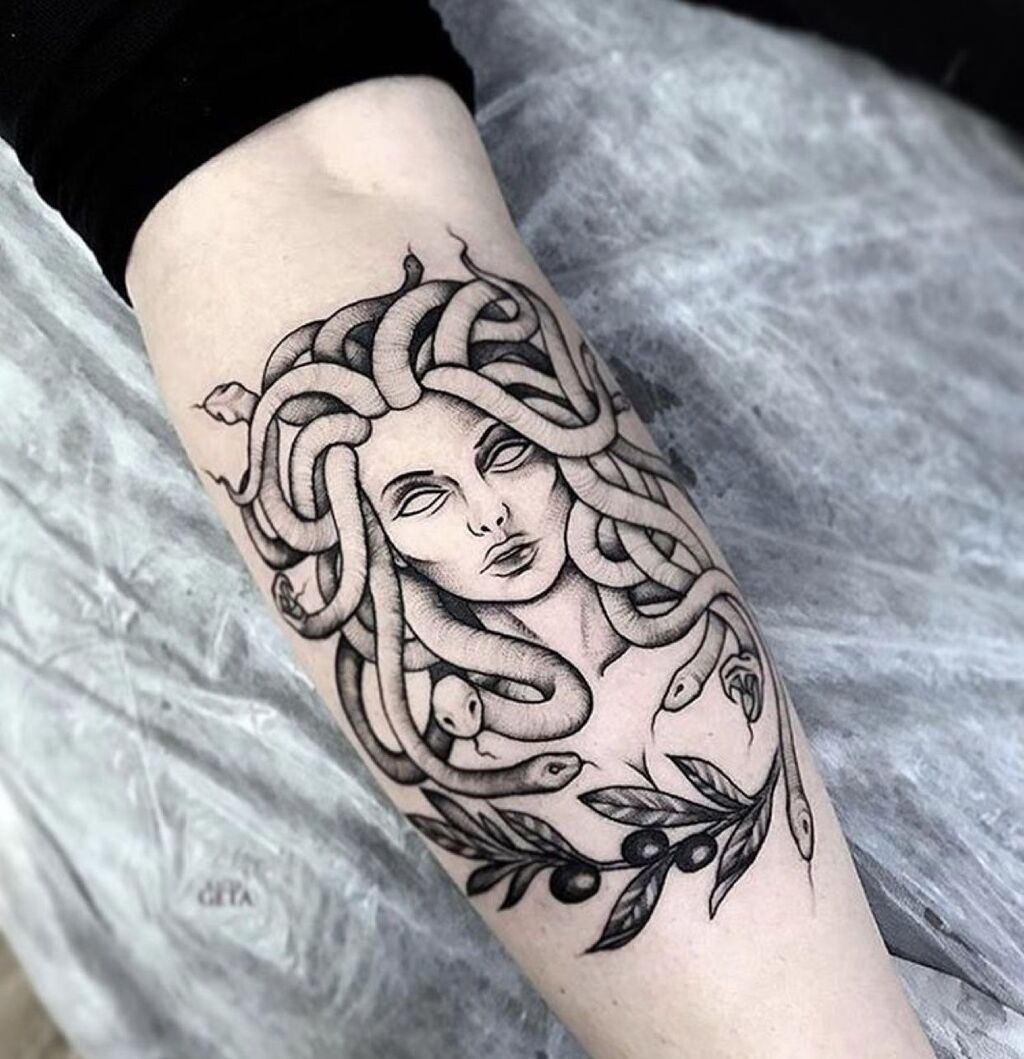 According to legend, medusa tattoo is intended to frighten, fascinate, and capture anybody who sees it. It is also used to represent feminine rage. As a result, it is a popular tattoo among women. One of the most stunning characteristics of Medusa tattoos, without a doubt, is the contrast between the beauty of her face and her serpent hair.

Medusa is a Greek mythological monster infamous for her power to turn people to stone with a single glance. As a result, she is the ideal emblem for everyone who wishes to demonstrate their toughness and fearlessness.

Many people associate Medusa’s story with the struggle and rebirth of a woman struggling with sexual abuse and trauma. Poseidon throws himself onto the young Medusa in the story, and she is punished for his deeds.

Following a re-examination of this Greek story, many individuals connect with the Medusa tattoo meaning as a victim rather than a villain, and wear the picture as a survival sign. One interpretation of the Medusa tattoo is that it represents strength after trauma or sexual assault.

The snake-haired Medusa is not well known until the first century B.C. Ovid, the Roman author, presents the mortal Medusa as a lovely maiden lured by Poseidon into an Athena temple. Seeing this blasphemy, the goddess became enraged and turned Medusa’s hair into snakes.

Medusa is a divisive figure in Greek mythology, but she inspires many. The medusa tattoo can be used as a shield against evil or as a symbol of the victims. So, let’s look at these 20 mind-blowing medusa tattoo ideas for women you must try right away. 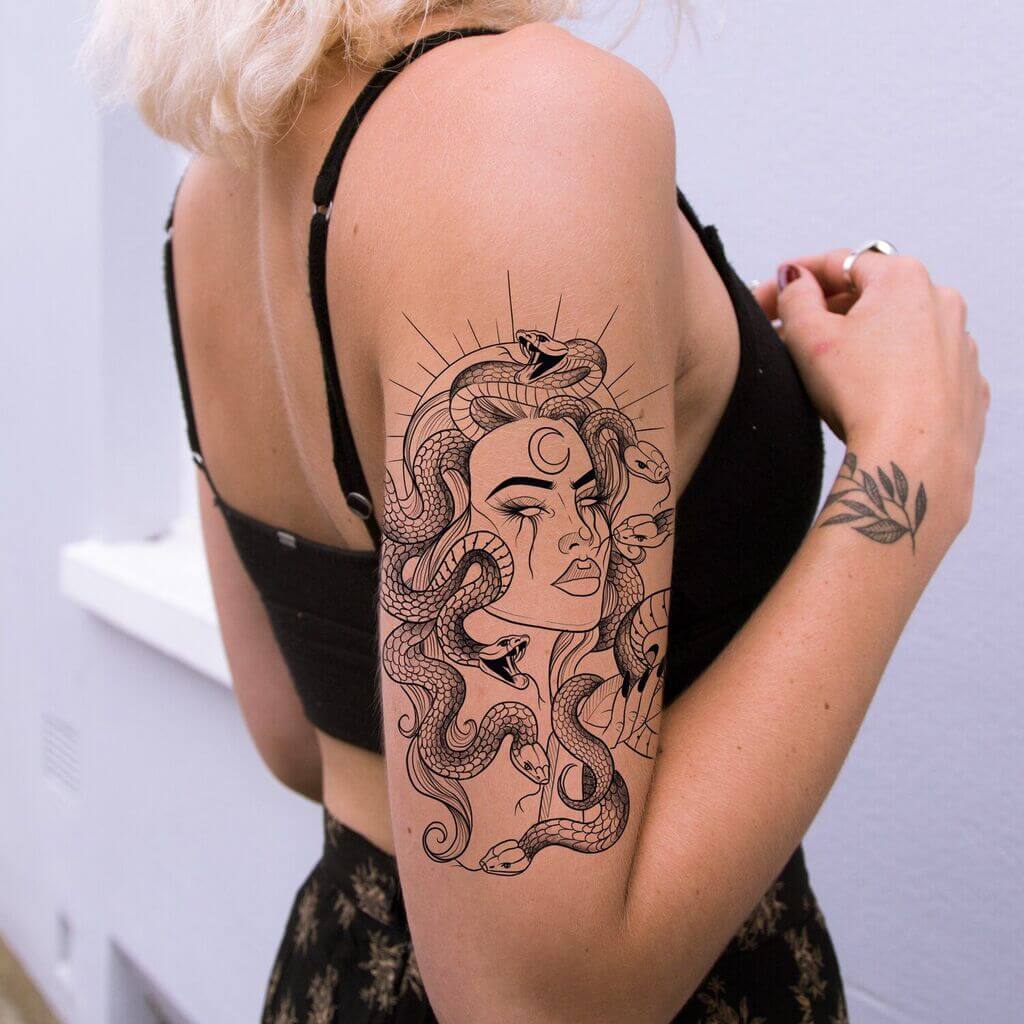 The Medusa is ideal for anybody searching for an out-of-the-ordinary tattoo, and there are several ways to depict her. Because Medusa had a horrific visage in the narrative, some tattoos depict her with a monster’s face. Some, on the other hand, opt to give her the visage of an angel. Her face can be realistic or comical, and it can be rendered in color or black ink. 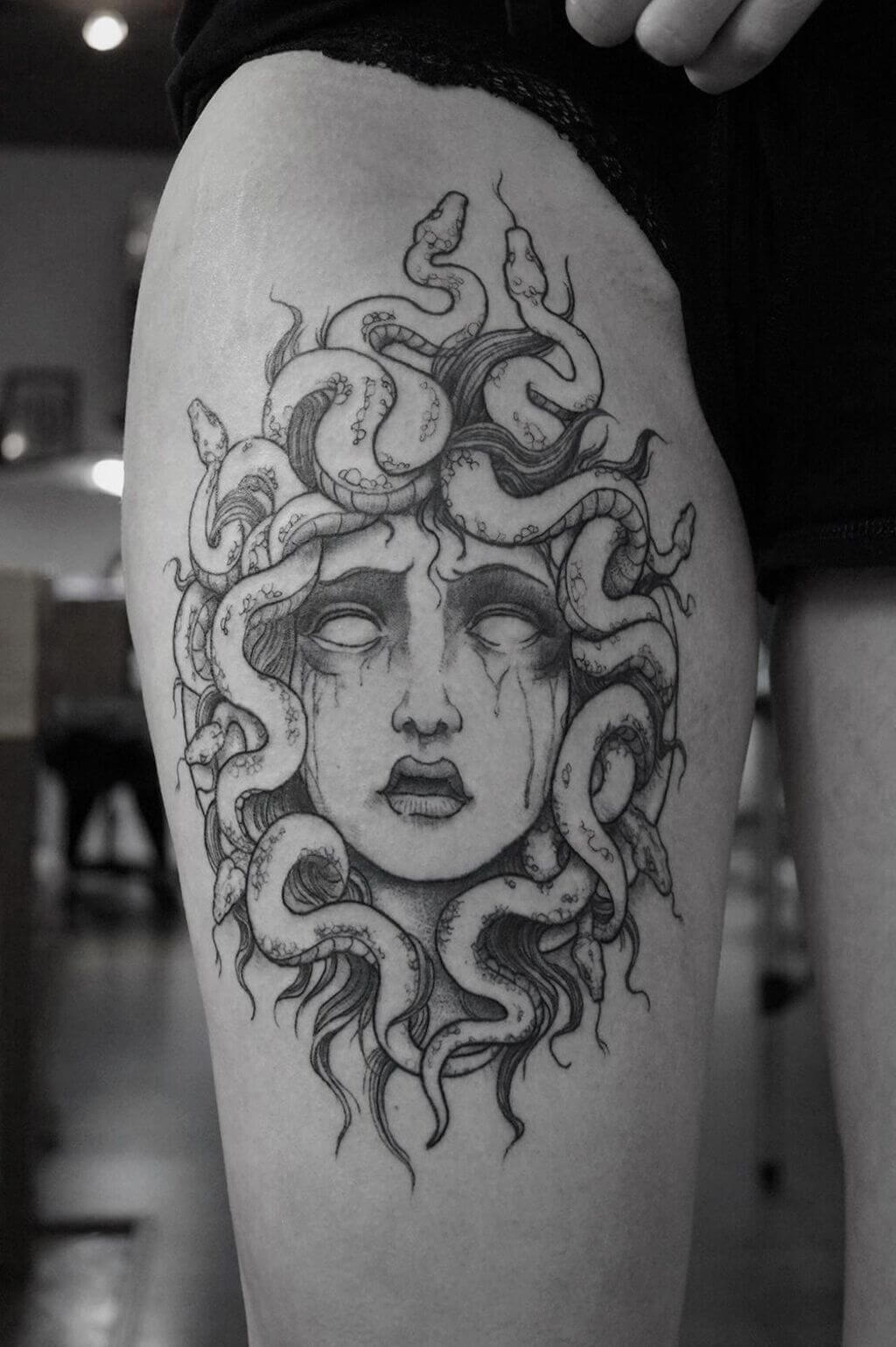 To begin, you will need a medusa drawing from which to make a medusa tattoo stencil. Online images will be the most convenient because you can quickly save them to your computer. Then, with this blueprint, you can draw this beautiful tattoo of medusa drawing and flaunt it the way you like. 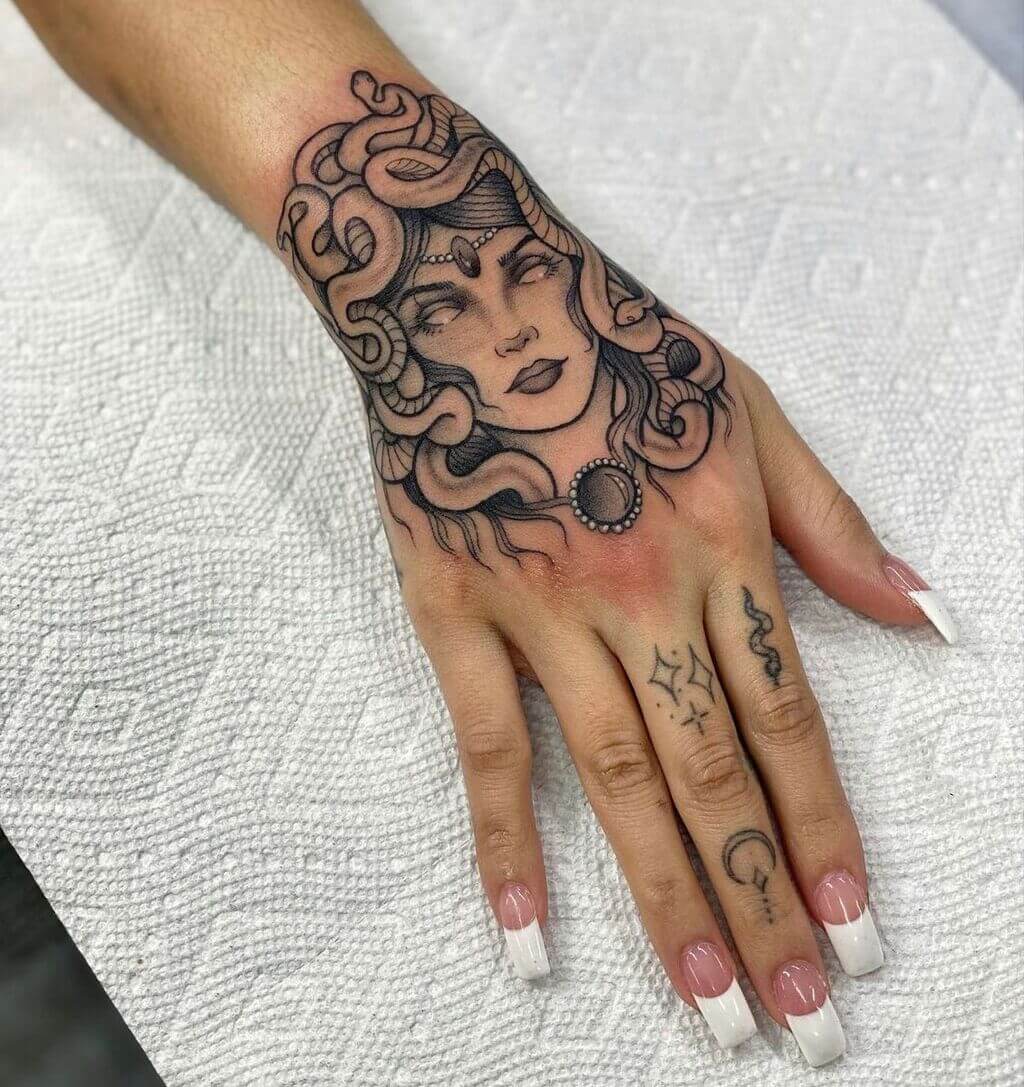 Getting a massive Medusa tattoo is a terrific method to create terrifying eye contact with people without having to look them in the eyes. Don’t even get us started on trying to communicate with someone! 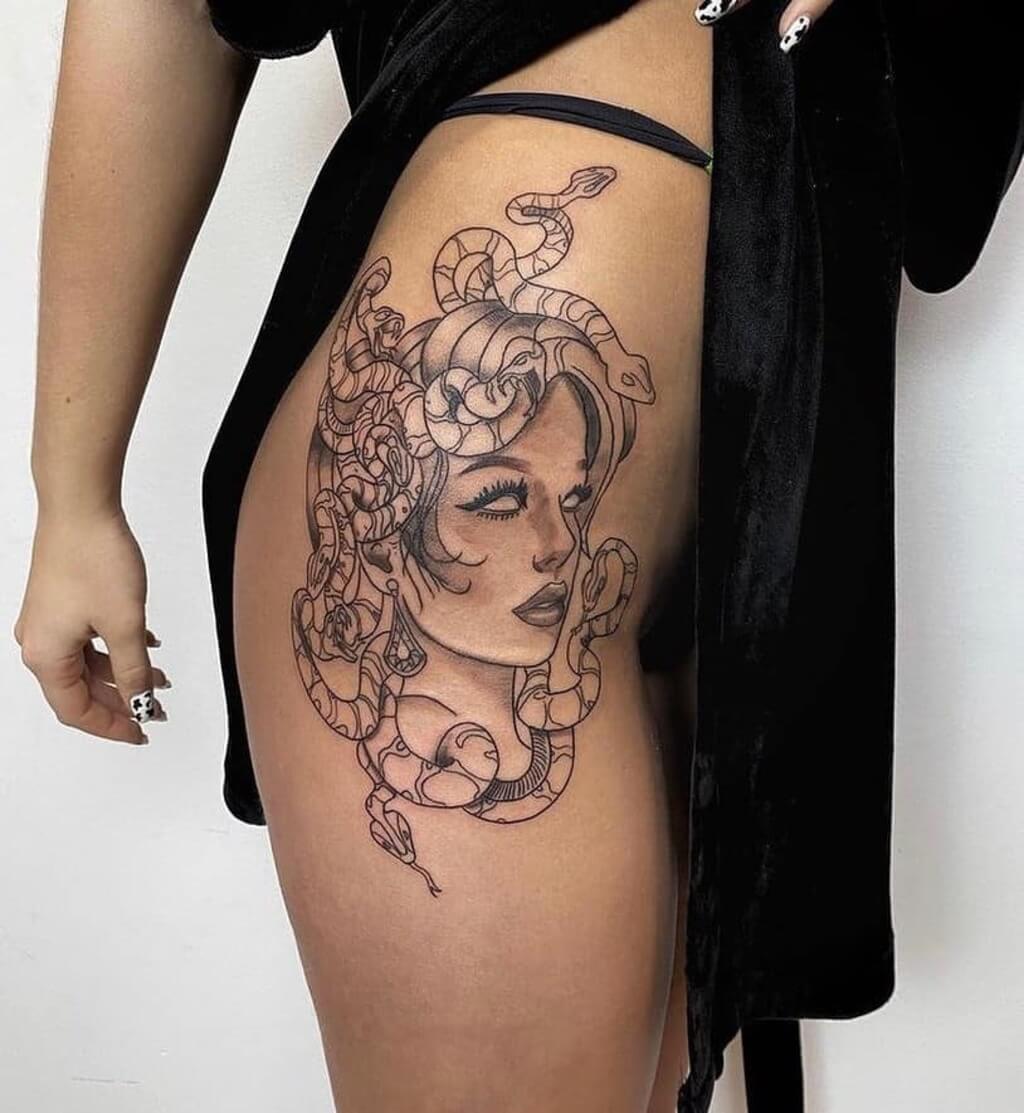 If you want to get a huge tattoo with shading and detail, the medusa thigh tattoos are a fantastic area to start. It’s a favorite site for ladies since it’s both seductive and personal. Another advantage of thigh tattoos is that they are easily disguised. This is advantageous if you work in an office with a rigorous dress code.

It’s also one of the least painful places to get tattooed because the region is meaty, with muscle, and few nerve endings. If you are sensitive to pain, you may consider getting a Medusa tattoo on your thigh. 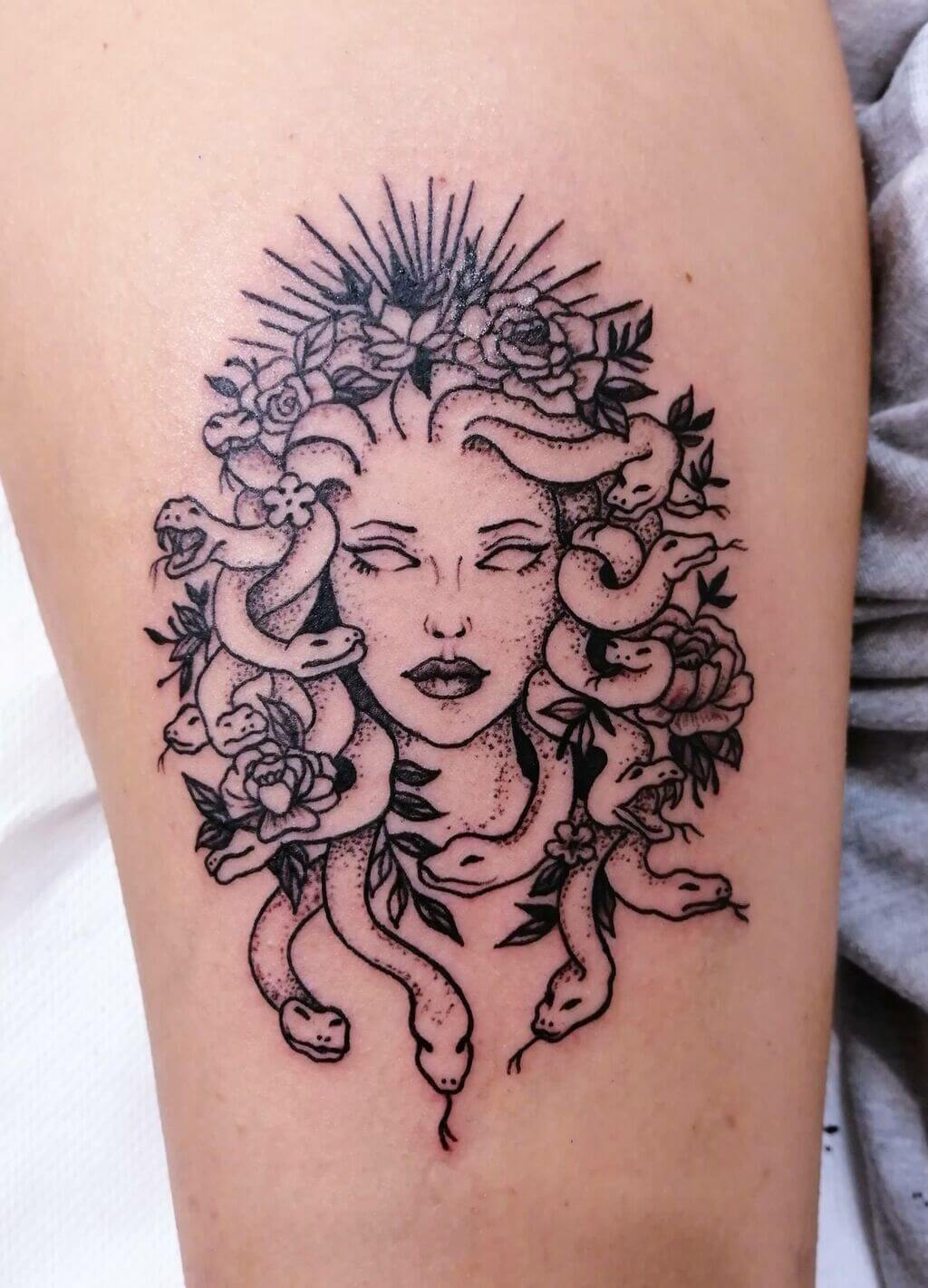 These simple Medusa tattoo styles conjure up ideas of seriousness, darkness, and power. Because of the great shading and detailing possible with black and gray tattoo inking, you may frequently enjoy some stunning additional touches on your Medusa tattoo, and the symbolism of the black and gray ink transmits authority to the spectator.

This stunning black-and-white ink picture of the Gorgon is alluring, as long as she doesn’t look at you. When the attention is solely on the head, the snakes become more prominent, giving the image a slightly horrific appearance. If you want to get a truly eye-catching Medusa head tattoo, go for her head with writhing snakes. 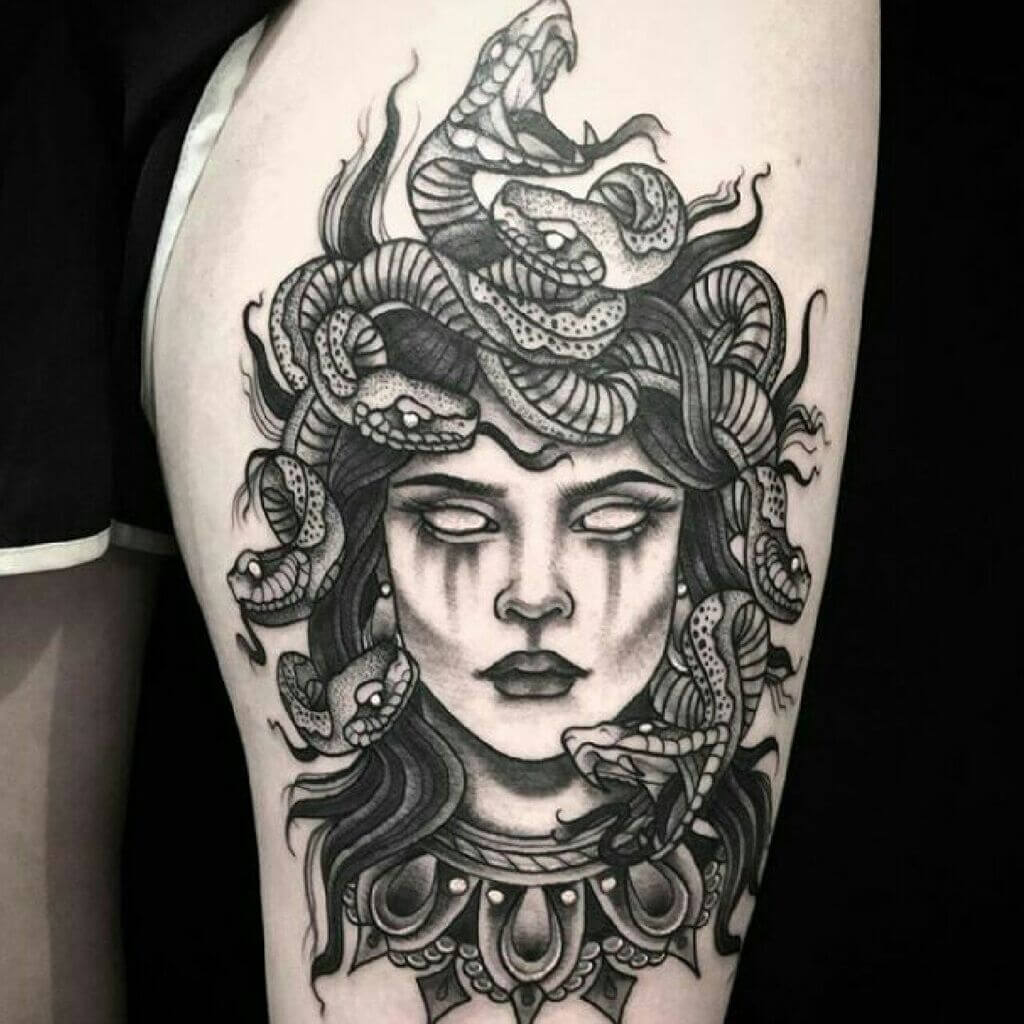 Traditional Medusa tattoos carry a lot of metaphorical meaning since they signify feminism and charm. It is utilized as a protective emblem against evil. Each tattoo has a different significance based on how the tattoo wearer interprets it. It is more than just a piece of art that matches your style.

Traditional Medusa tattoos symbolize rebirth and power. These traditional tattoos are highly detailed, with strong lines and bright images intertwined with floral art. Several neo-traditional medusa tattoo designs are both unique and intriguing. Medusa is a symbol of perilous beauty. 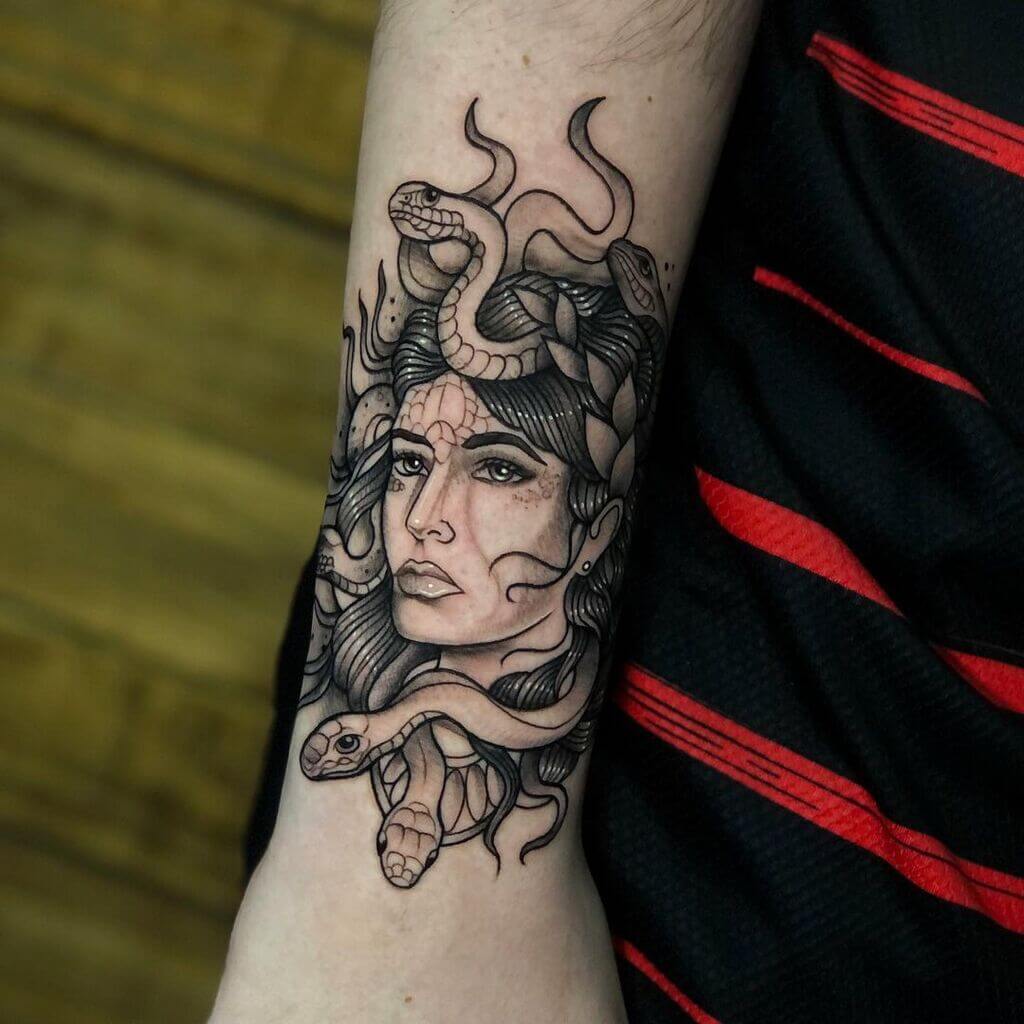 Greek god tattoos are rich in epic wars and legendary legends, giving them an excellent source of inspiration for selecting a new tattoo design. The snake-haired Medusa is one of the most recognized figures from this mythos.

Her narrative, one of betrayal, punishment, and feminine power, has withstood the test of time and remains a popular option for a tattoo with a lot of significance behind it. 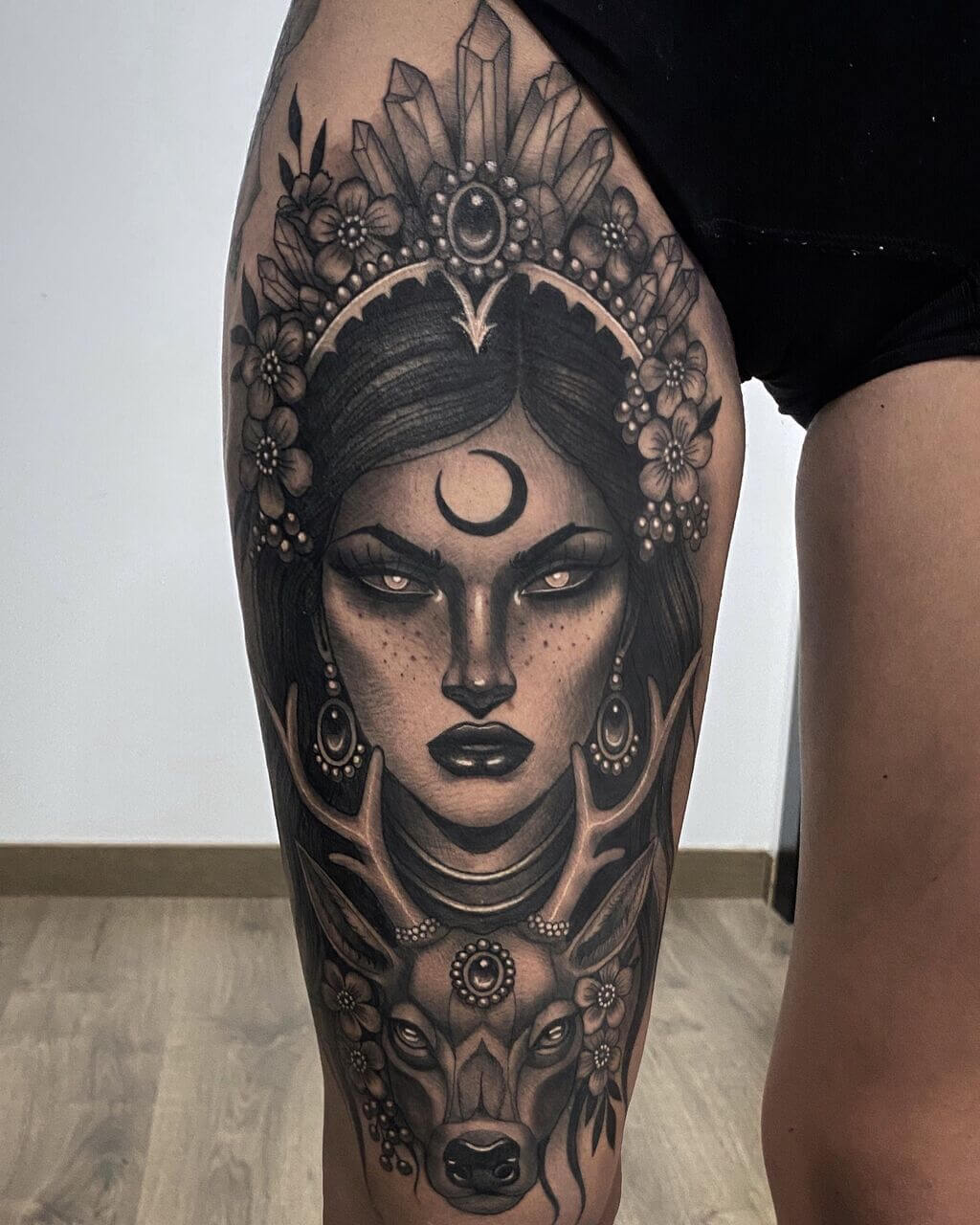 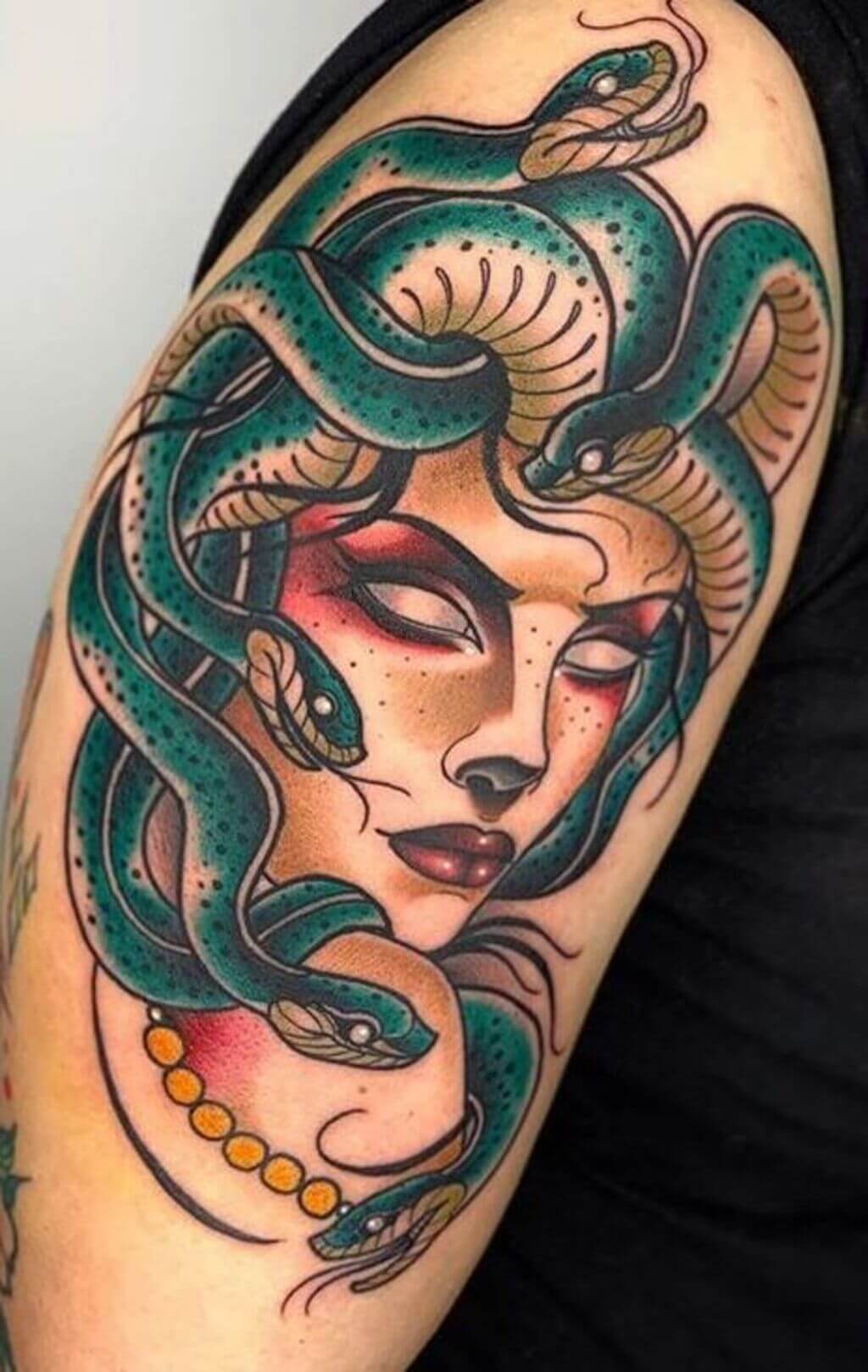 The Medusa tattoo may be done in a variety of styles. Medusa tattoo is a highly popular and strong Greek mythology tattoos that range from realism. There are several well-known personalities to pick from.

Medusa is a wonderful choice for someone looking for a unique tattoo. She can be portrayed in a variety of ways. Medusa, according to tradition, has a horrific visage. That’s why some tattoo artists give her the visage of a demon. 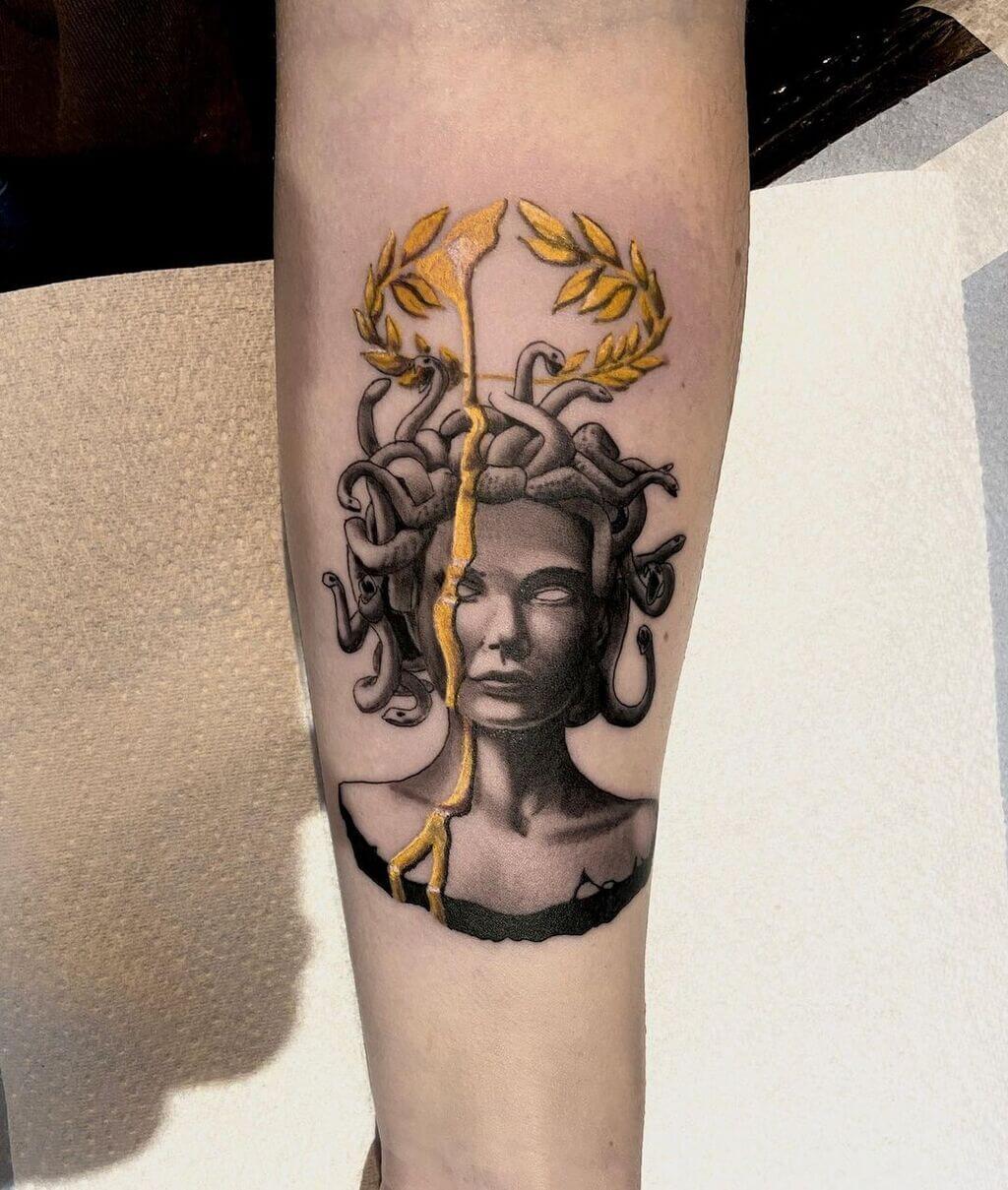 Medusa’s wrathful glare did not appear anywhere. She had been victimized by a culture that never punishes males for their actions and instead isolates women. Her rage, indignation, and irritation are justified, and those who hurt her should be terrified of her.

This stunning Medusa tattoo, done with the dot work approach, emphasizes her stare, which has such power that it transforms humans to stone. The bright black ink nicely depicts the ice-cold look, devoid of any kindness.

Wearing this Medusa tattoo will instantly provide you with an overwhelming sensation of power and strength. 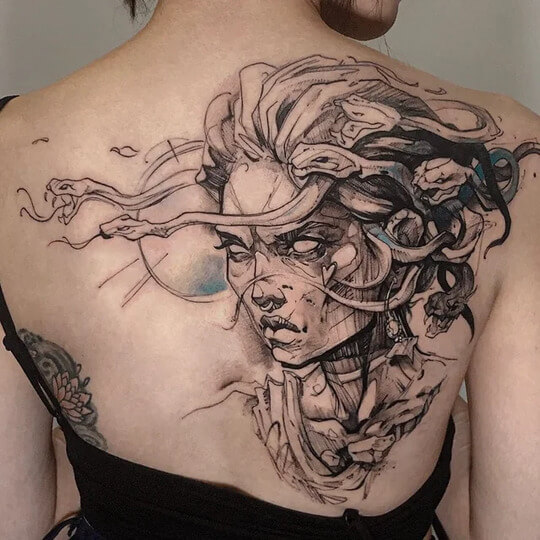 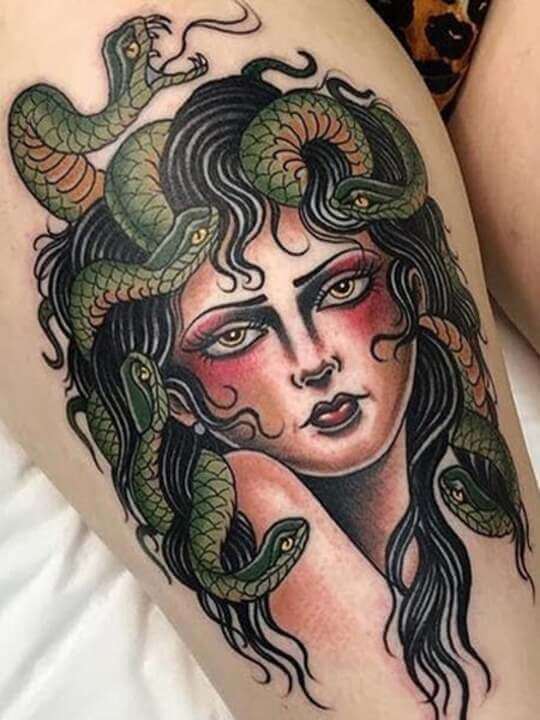 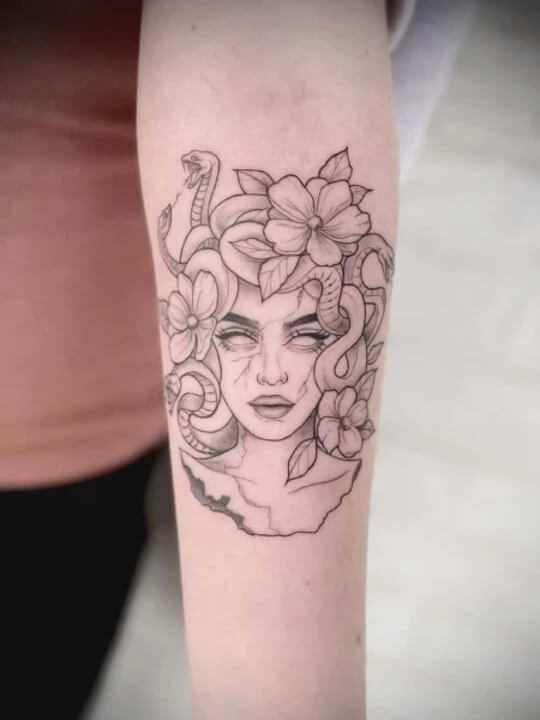 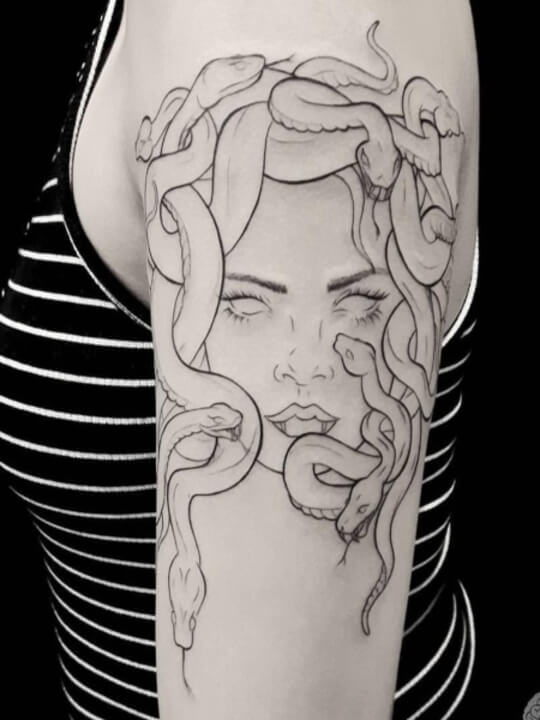 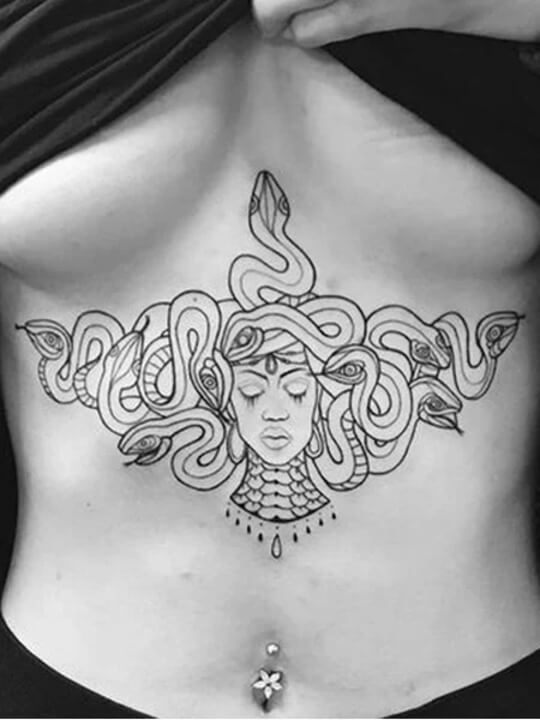 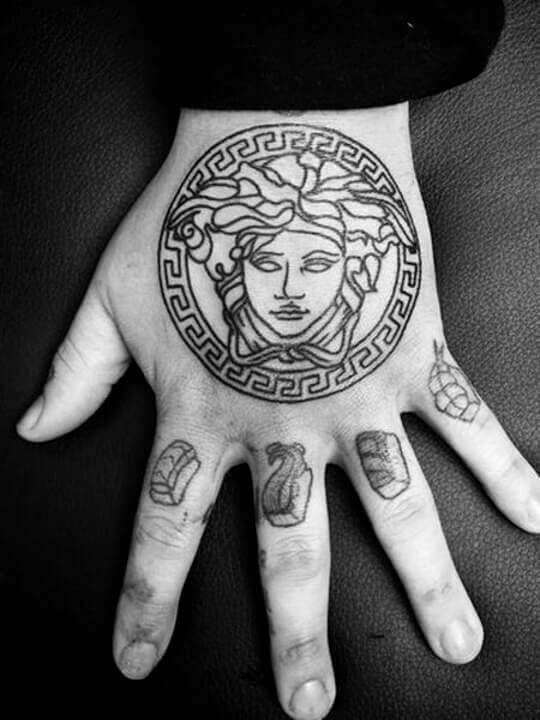 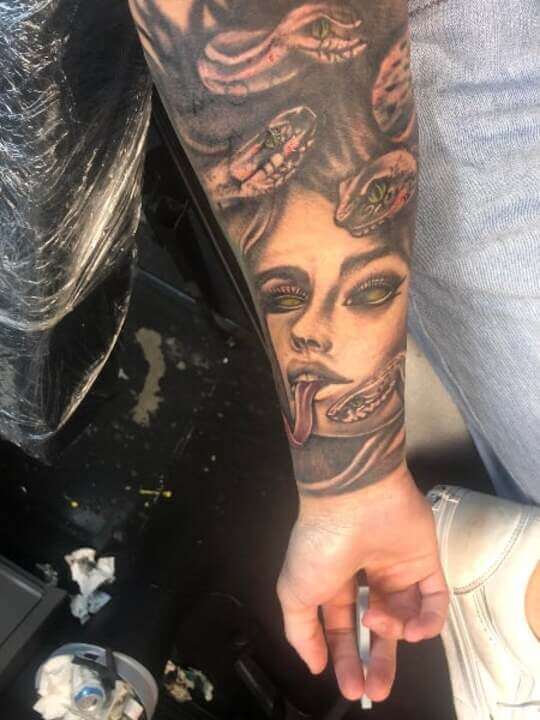 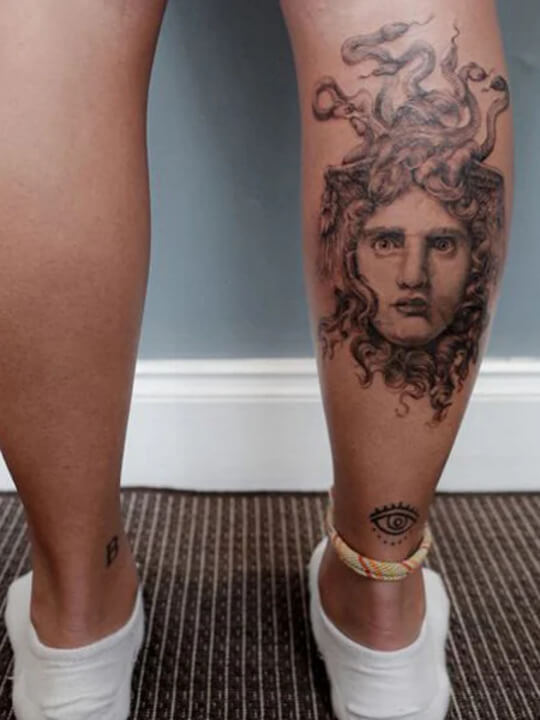 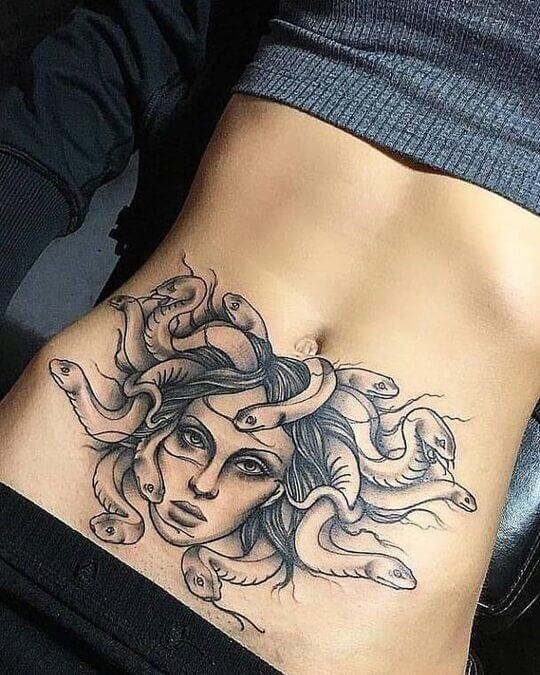 1. What Does a Medusa Tattoo Represent?

Medusa is a divisive figure in Greek mythology, but she inspires many. A medusa tattoo can be used as a shield against evil or as a symbol of the victims. According to certain views, Medusa represents feminine weakness and the wrongdoing committed against her under the guise of evil and might.

2. Why Is Medusa Such a Popular Tattoo Design?

The reason can be anything, it is up to you, whether go for the medusa tattoo’s beauty or the real meaning behind it!

3. Is It Possible to Have a Medusa Tattoo?

Anyone can get a Medusa tattoo, and your design will almost certainly become a talking point. These sculptures might be gorgeous and ornate, or basic and minimalistic, but they are always extremely meaningful. Medusa is a Gorgon, a female monster, in Greek mythology. Others, though, see her as a victim.

4. How Much Does a Medusa Tattoo Cost?

Medusa Tattoo is owned and maintained by tattoo artists, and they specialize in what they do best. They have an $80 minimum for arms and legs and a $100 minimum for other regions of the body.

5. What Is Medusa’s Moral Lesson?

I believe Medusa’s morals teach us to appreciate others and to think about others as well as ourselves. It warns everyone not to make the same mistake that Medusa did, and that if they do, they will pay for it.

Medusa Tattoo For Every Female Out There! 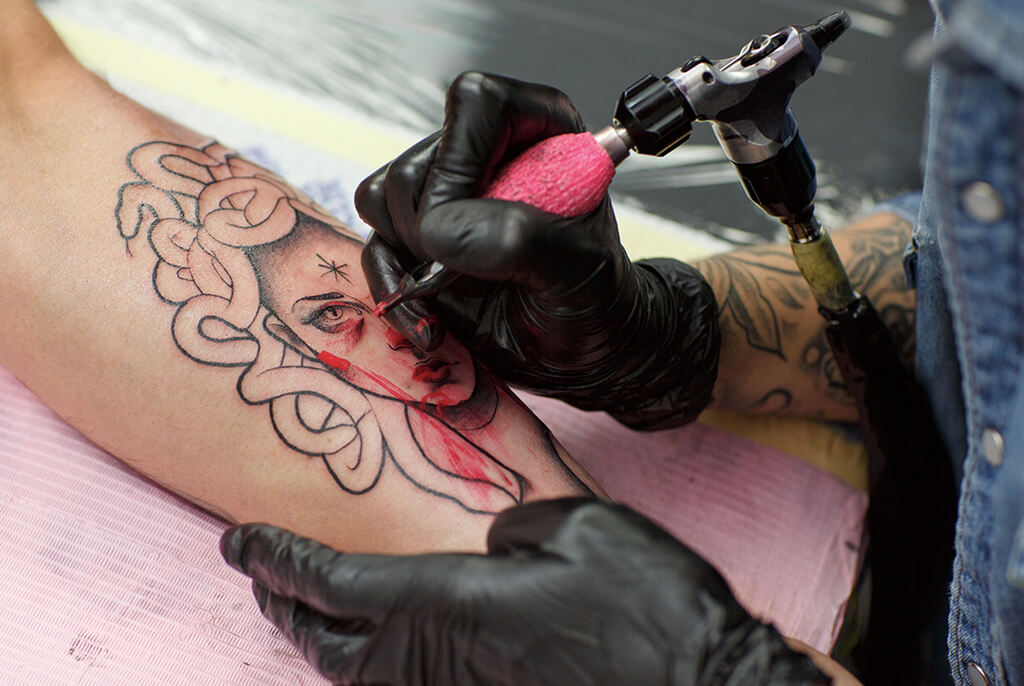 With so many options for theme and placement, you should be motivated to get your Medusa tattoo! Take your time to develop a notion that is unique to you, taking into consideration your particular interpretation of the legendary story.

Tattoos are still considered taboo in some workplaces. However, individuals have begun to accept this form of body art, and it has become a component of modern-day sartorial style. Tattoos, in particular, are commonly seen in pop culture. If you don’t want to show off your tattoo, you can have a tattoo inked on the body part that you can easily hide.