Are you searching for the arrow tattoo meaning? Well, I have penned down “an arrow tattoo 101” kind of article. Read till the end!

Native Americans relied heavily on arrows for hunting, combat, and self-defense. The reason behind that is the strong and persistent symbolism it has! The arrow tattoo served as a tremendous source of inspiration for a wide range of body art. A semicolon arrow, for example, is likely to appeal to someone looking for a tattoo that represents their accomplishment after conquering adversity.

For many years, people have done arrow tattoo designs on their bodies. Tattooing has been used as a form of treatment or as a rite of passage from infancy to maturity.

Arrow tattoo meaning has profound symbolic value while appearing to be easy. An arrow is wonderful for both skilled and inexperienced tattoo enthusiasts. Arrows are gradually becoming some of the most popular tattoo designs. With all of the numerous forms of arrows, they may be used to represent practically anything or translated into a variety of notions.

Jack London once said- “Show me a man with a tattoo and I’ll show you a man with an interesting past.”

What Is The Meaning Of Symbol?

From prehistoric cave paintings to modern-day logos and websites, symbols convey a level of creativity that few other art forms can match. Crosses and the Ying Yang have become legendary emblems, while the heart and peace sign are popular symbols in the tattoo industry.

Symbols are the root of all individual knowledge and serve as interpretive pathways for all personal knowledge. A symbol’s tattoo meanins can be expressed in a variety of ways, yet they all serve the same purpose.

A symbol may be whatever you want it to be while preserving its original meaning. Music, sounds, pictures, ideas, and beliefs may all be represented by symbols. A red heart, for example, represents love and desire, yet a red hexagon on a poll begs us to stop!

Isomorphic, comparative, and ideological symbols are the three types of symbols. Subsections can be formed from the first three. Isomorphic symbols adapt to a location’s cultural milieu, such as bowing or linking hands to greet someone or wearing black clothing to grieve the loss of someone.

A symbol is something that is used for or is thought to symbolize something else. It could be a tangible object that represents something, generally something immaterial; an emblem, token, or sign.

A symbol is an item, form, sign, or letter that represents something else. A flag is a national emblem.

What Does The Arrow Tattoo Symbol Represent?

Tattoos are one of the finest methods to communicate your personality, thoughts, ideas, or interests in a visible form that will last a lifetime. For that, selecting an image with a powerful significance is the best method to pick what will be imprinted on your skin. Also, there is no question that arrow tattooing is becoming an extremely popular solution.

However, do you know what they symbolize and what all of their various tattoo meanings are? Before taking the final step, it is critical to understand this. The Arrow symbol in addition to being a weapon of war conveys peace.

Arrows have been there for thousands of years, and several legends are related to their origin. Some claim they were invented by the Phoenicians, while others say Egyptians invented them. The certainty in both the cases is that the arrow was a tool for hunting wildlife, fishing, and even as a weapon of war throughout history.

Due to its role as a tool and weapon, arrow tattoos naturally connote concepts of struggle and success. An arrow drawn back on a bow signifies tension, conflict, or a life struggle in a design. An arrow resting on a bow, on the other hand, may indicate the attainment of serenity and quiet. Here you can see spine tatto.

Arrow tattoos have been around for hundreds of years. Originally, this motif was used by Native American tribes as an arrow symbol of hunting and fighting. It has recently garnered popularity among individuals from various walks of life due to its diversity in form and meaning.

You may have a little arrow on your wrist or a massive arrow that extends the length of your arm and still seem crazy. And the sort of arrow tattoo you select might indicate everything from struggle to friendship to protection.

The arrow, often seen as a Native American symbol, may have a variety of meanings. These interpretations can also differ from tribe to tribe. Native Americans are well-known for communicating their history, ideals, and dreams through signs and symbols.

In their culture, the arrow was a weapon; it was used to hunt and supply for their family, as well as to give a defense, and as such, it was a tool for maintaining life.

Along with its function as a tool and weapon, arrow tattoos naturally depict the concepts of struggle and success. A graphic with an arrow being drawn back on a bow signifies tension, conflict, or personal struggle. An arrow resting on a bow, on the other hand, may indicate the attainment of serenity and quiet.

Now, let’s understand the two different types of arrow tattoos and their meanings. They are among the most inked arrow tattoos. 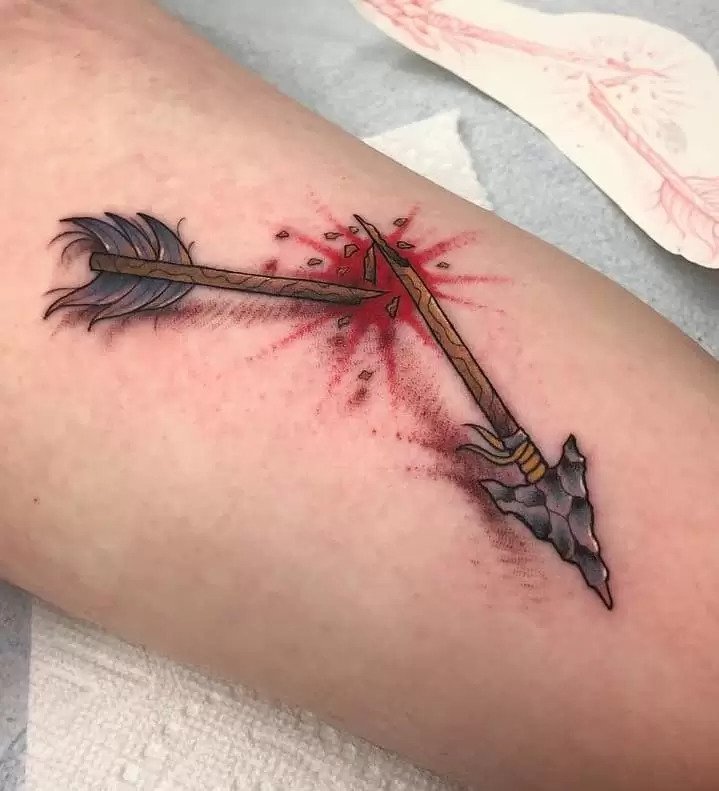 The phrase “Broken Arrow” is used by the United States military to describe an accident that includes nuclear weapons or nuclear weapons components but does not result in the risk of nuclear war.

A broken arrow is one of the deep meaningful tattoo symbols and one of the most popular tattoo designs these days. Unlike many other image designs, this one has a deep significance. Broken arrows frequently signify unfinished business or a broken romantic connection. So, if you’re having trouble with your present love life, this may be a great arrow tattoo design for you.

A broken arrow tattoo meaning suggests a less-than-perfect launch, but it also portrays a person being flung backward in life, blown ahead, and landing with tremendous force. This tattoo is commonly found on troops who have been killed in action.

You could find the best deep meaningful tattoo symbols online related to broken tattoos and have them engraved on your body.

Also Read: 7 Latest & Stylish Breast Tattoos You Must Try in 2022 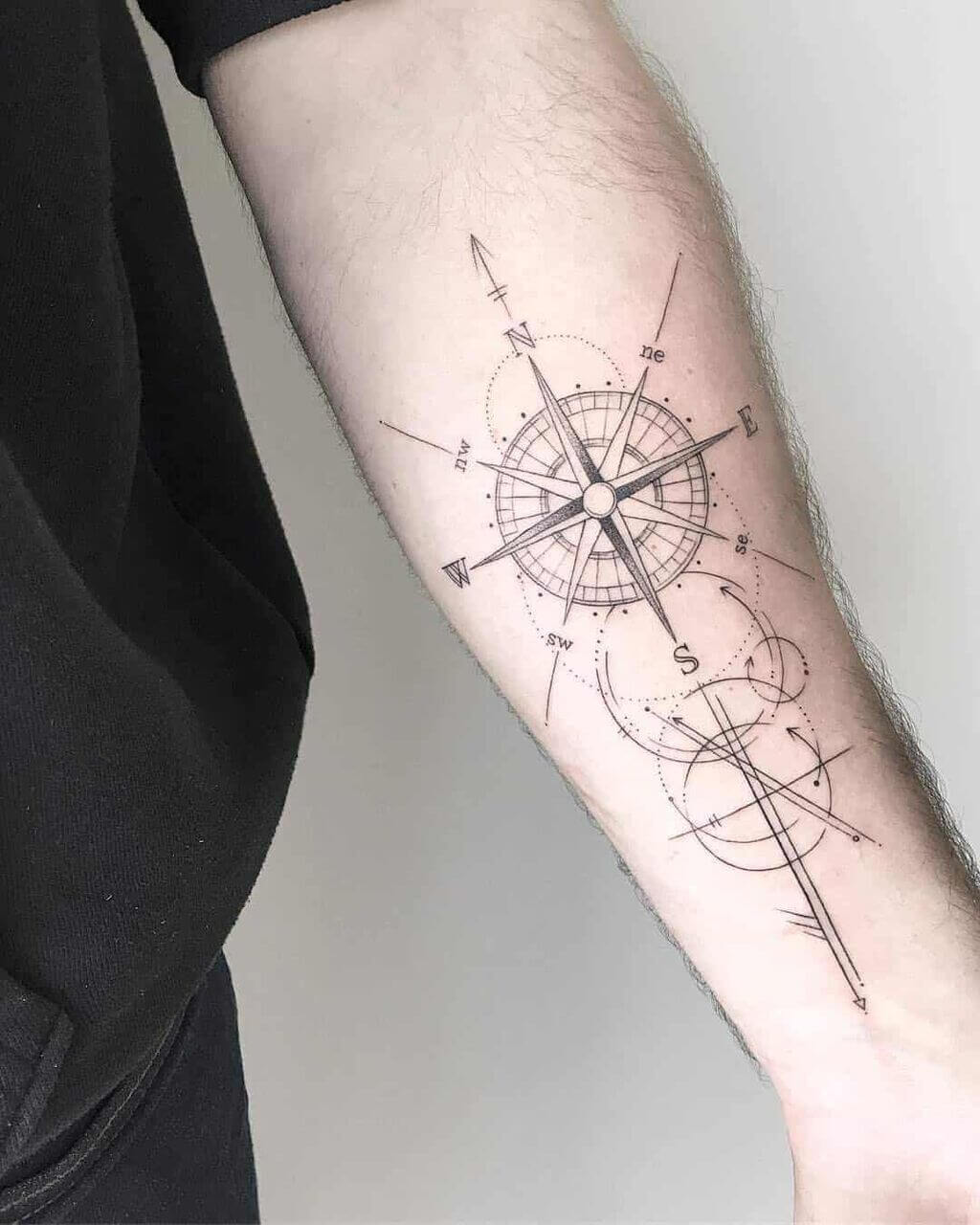 A compass tattoo, one of the best and most meaningful arrow tattoos may not appear appealing on paper, but after it is inked on your skin, you’ll wonder how you ever traveled without it. More than just a navigational aid, compass ink represents the inner compass we all have within us that keeps us on track no matter what life throws at us. We call the inner compass – Intuition.

Our guide on compass arrow tattoo meaning covers everything from complex symbolism, the runic compass, and cartography to different aesthetic decisions, technical and application options, and more, giving you some excellent knowledge to include in your design.

A compass arrow tattoo, or you can say another meaningful arrow tattoo symbolizes moving on in a new direction or beginning of a new chapter in one’s life. Collectors seeking direction, protection, and guidance go for the compass tattoo as mentioned in the history of tattoos. For some, such as sailors and soldiers, they represent direction and protection when on long-distance travel. Along with that, it also represents a longing for home and a link to loved ones left behind.

As we know that the compass gives people direction (and balance), they make decisions throughout their lives. Having a constant reference point to look at whether moving ahead or remembering helps one stay grounded and clear their thoughts.

Your tattoo might remind you of all the times you’ve gotten yourself out of a jam and that you can handle any circumstance you put yourself in!

A compass tattoo can remind you of where you have been, where you are now, and which way to go next. Some people acquire compass tattoos to commemorate their path toward self-discovery, while others get them as a sign of independence.

That’s why so many people have compass tattoos: they sense a connection to this little, steadfast friend. 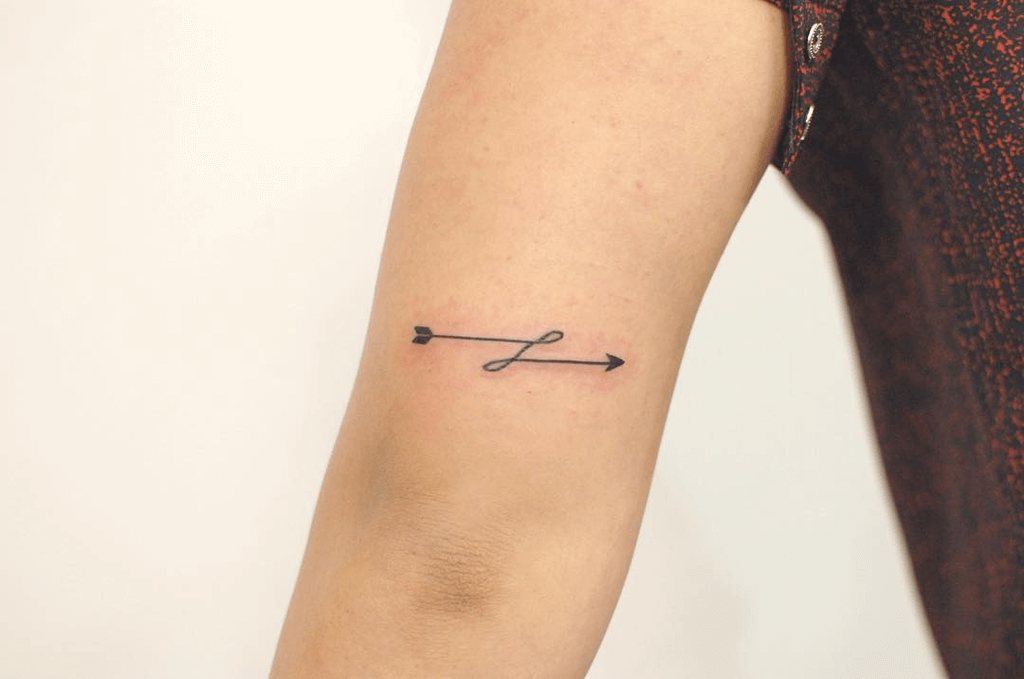 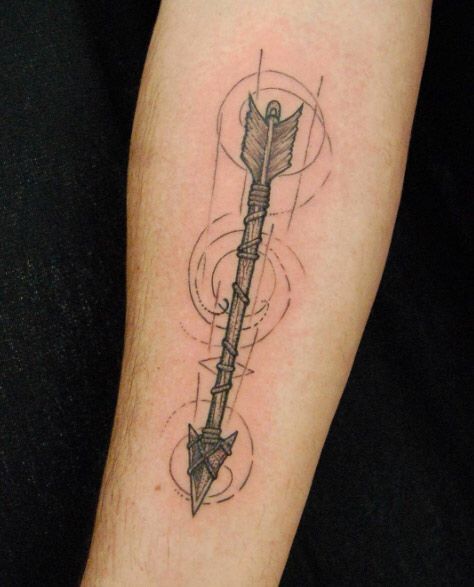 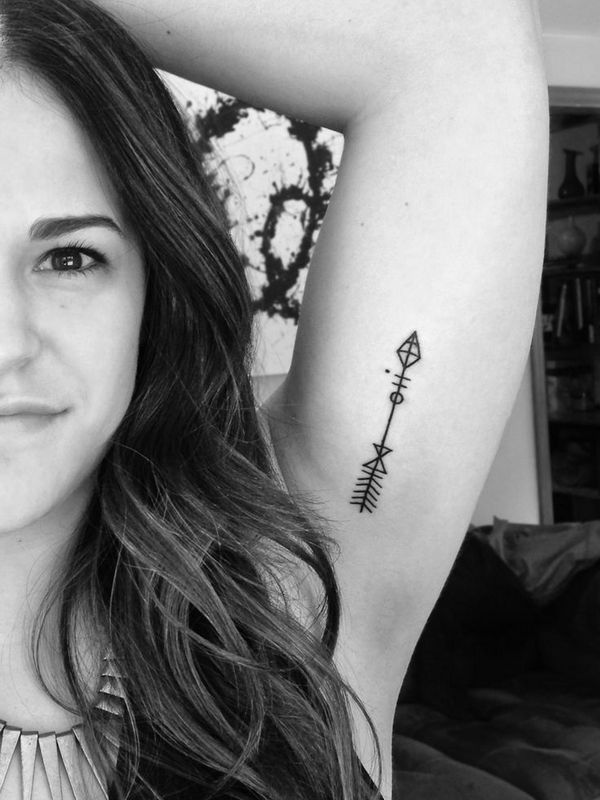 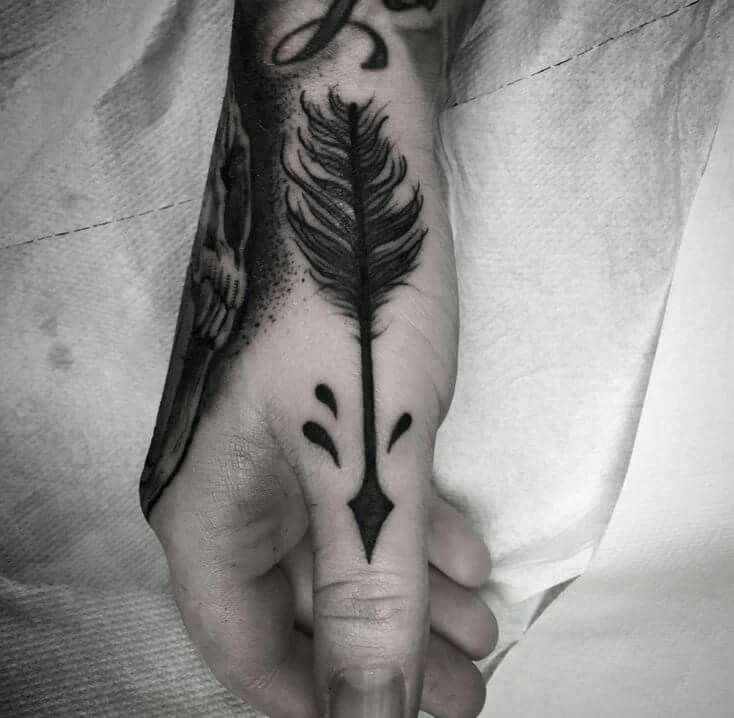 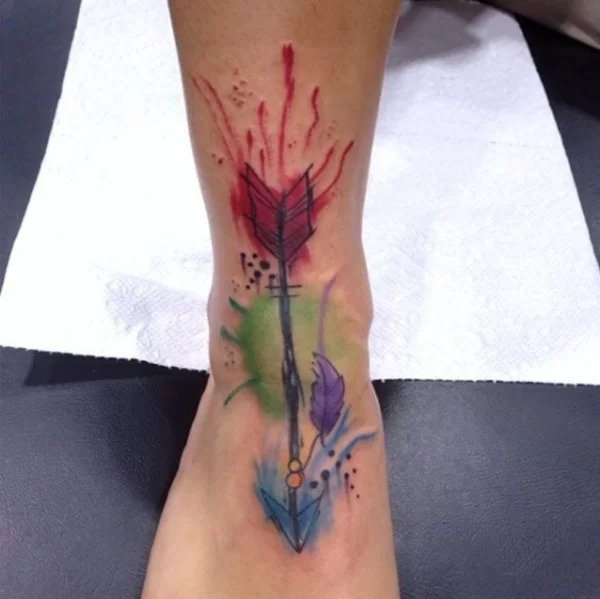 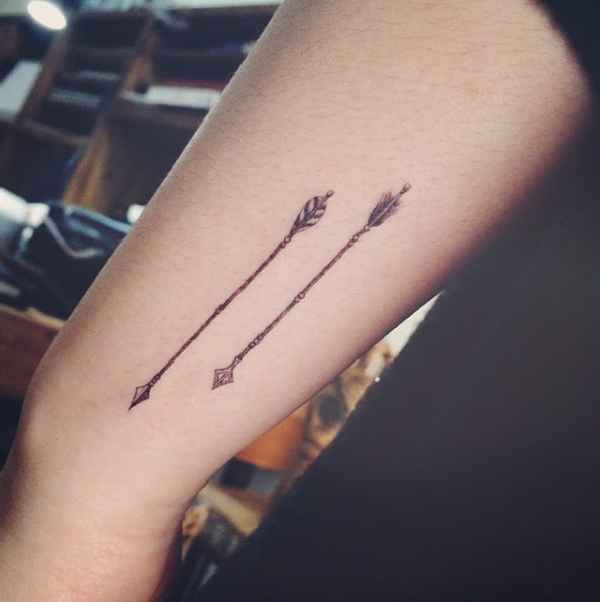 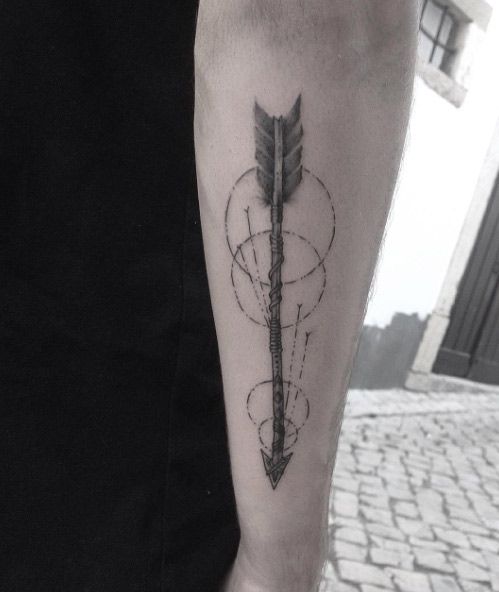 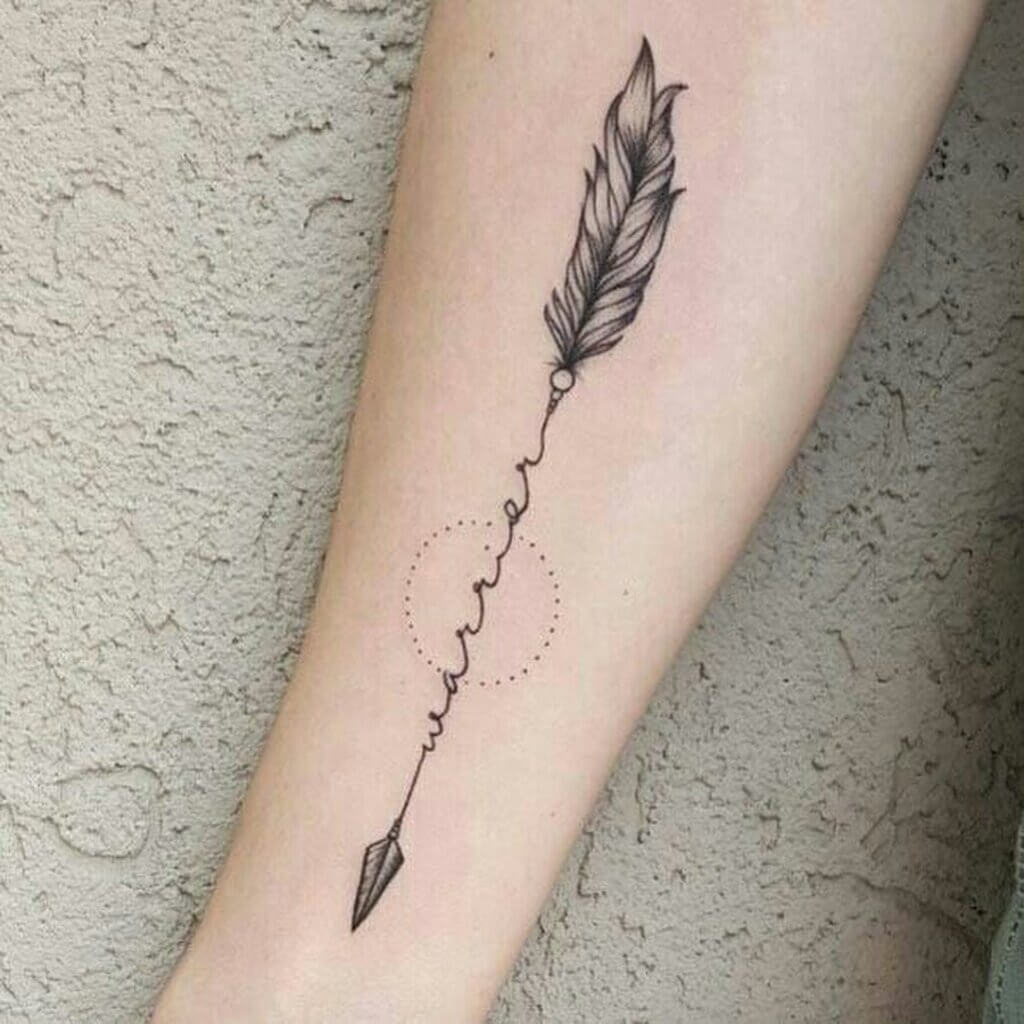 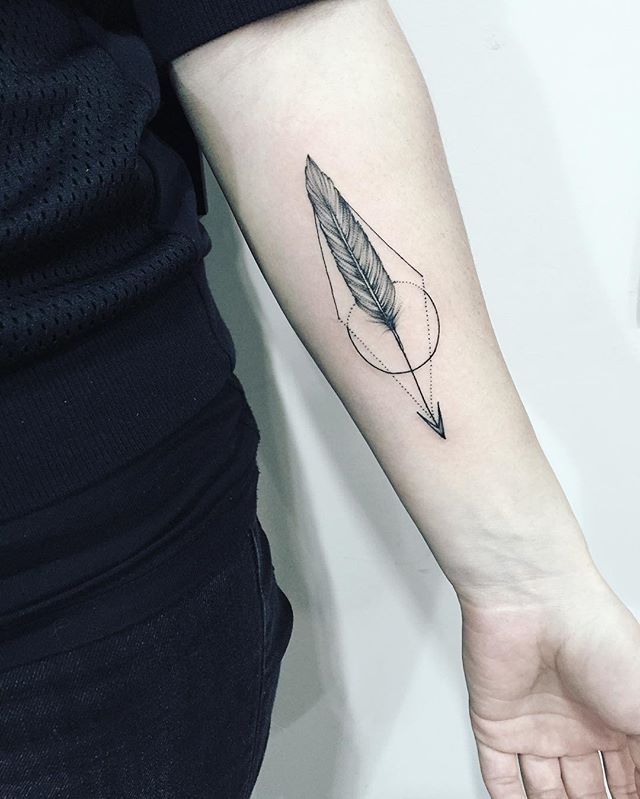 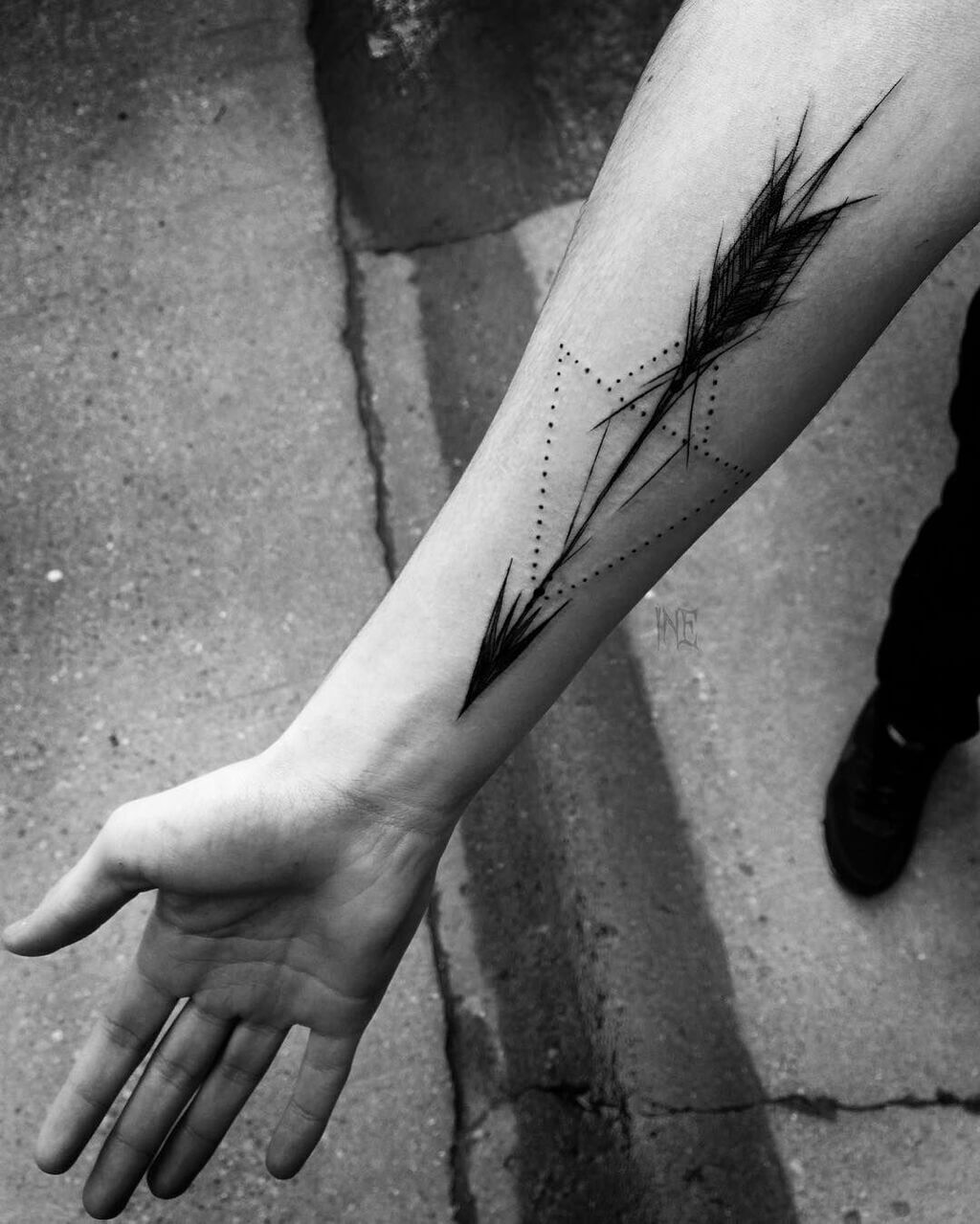 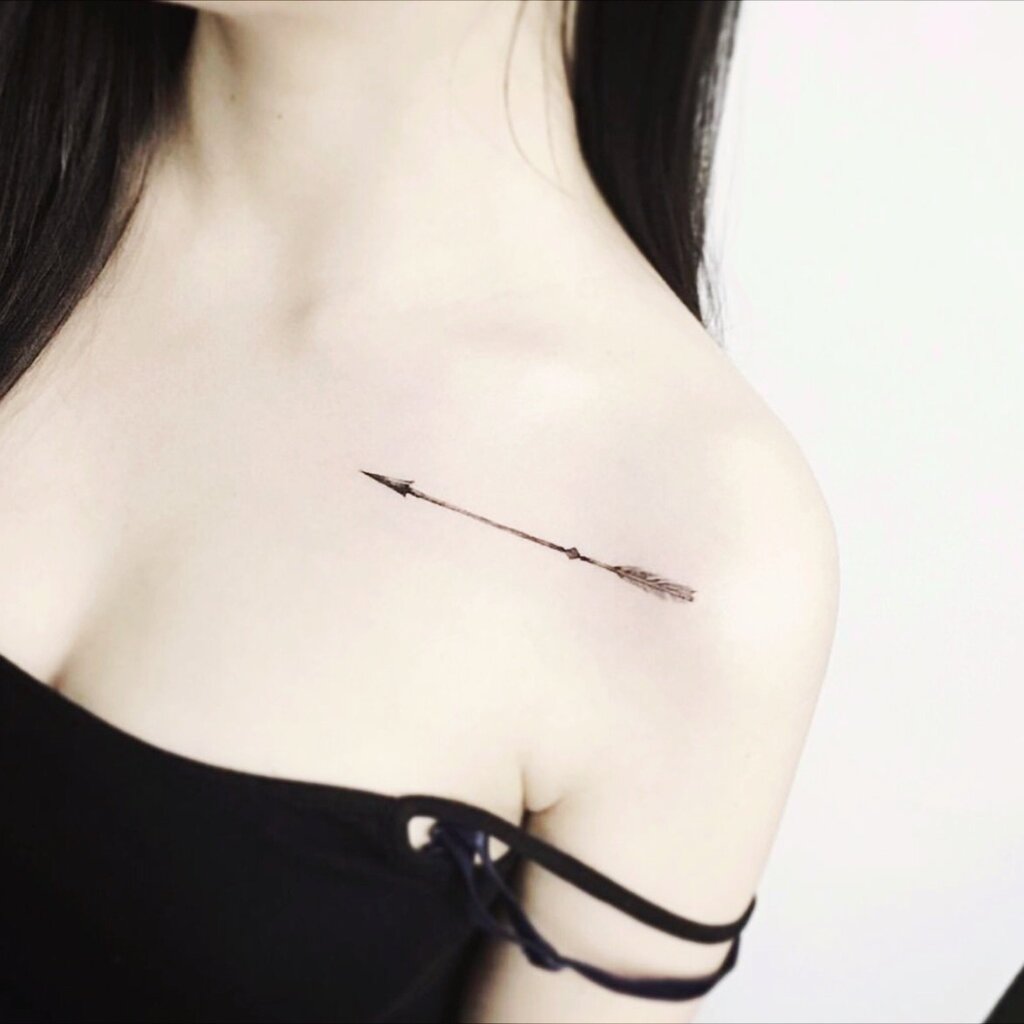 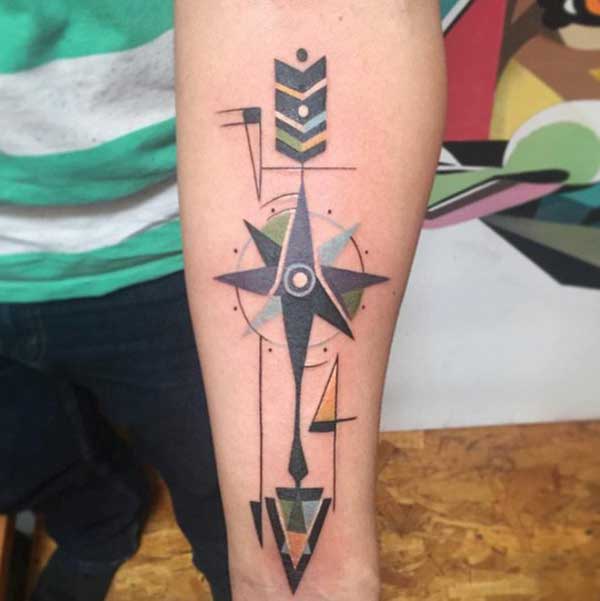 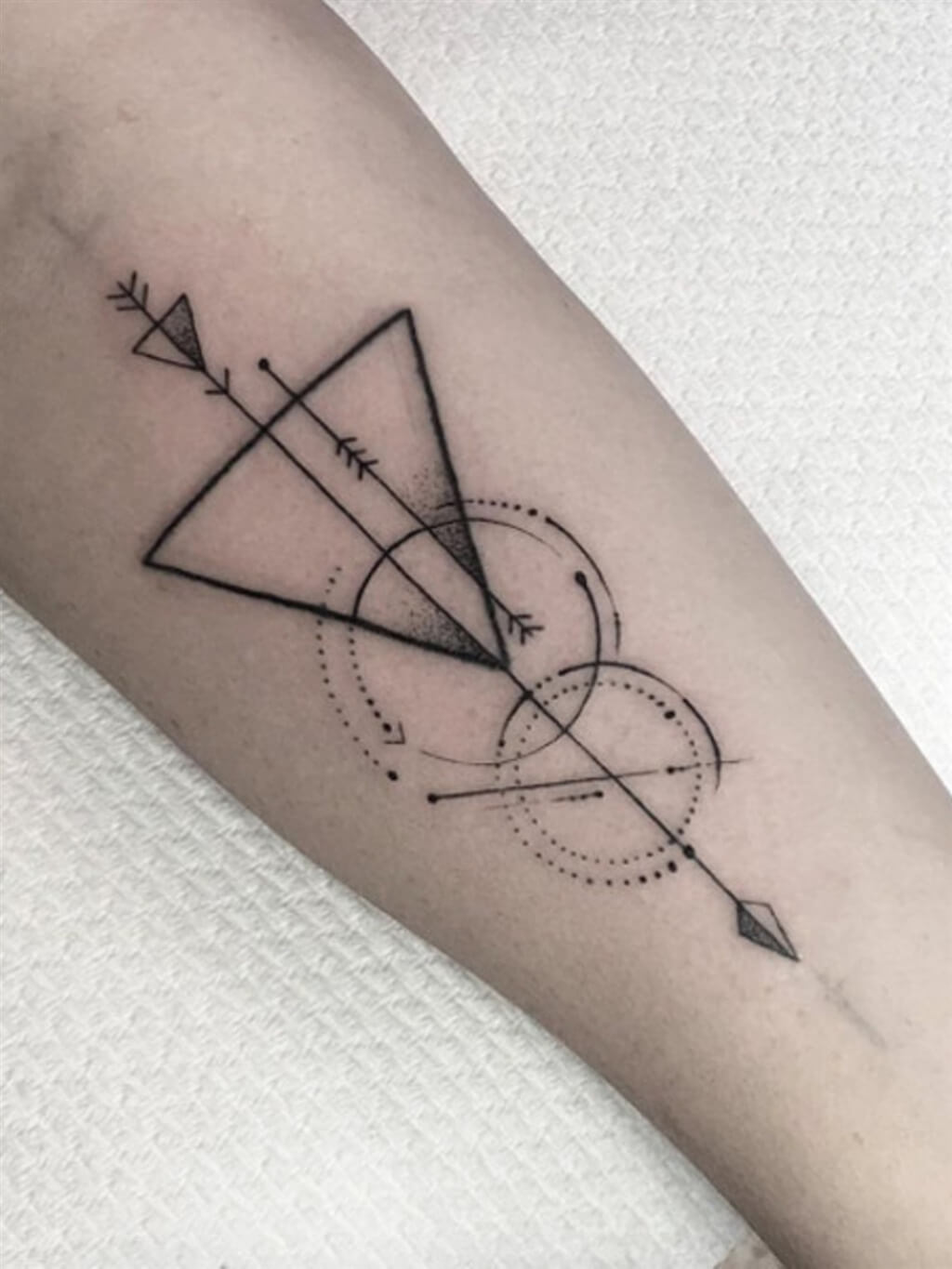 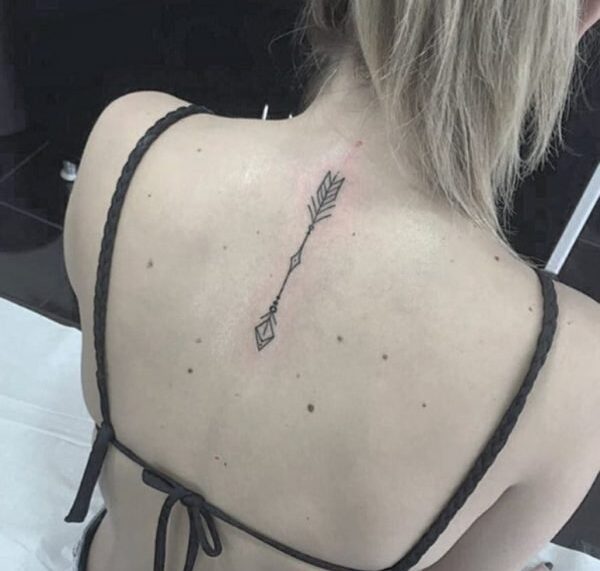 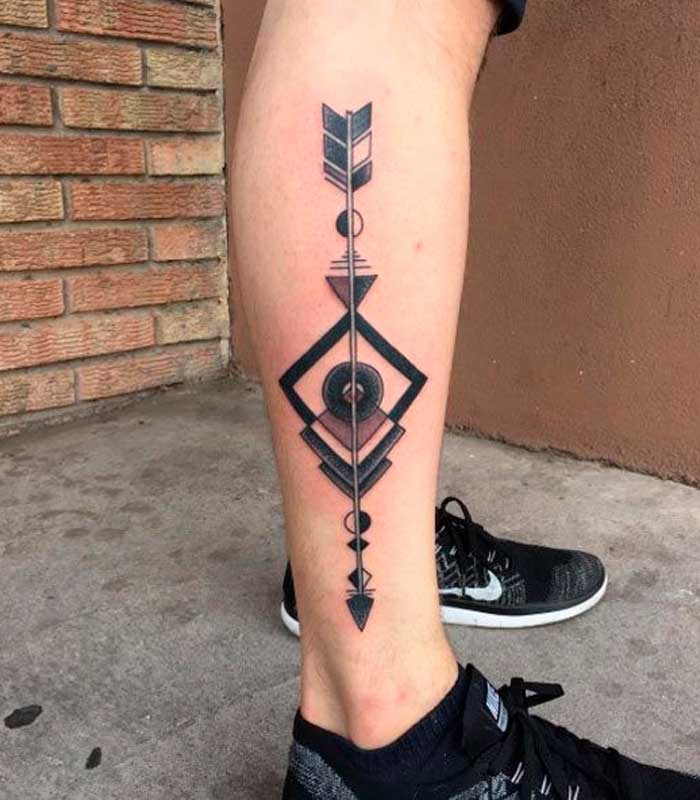 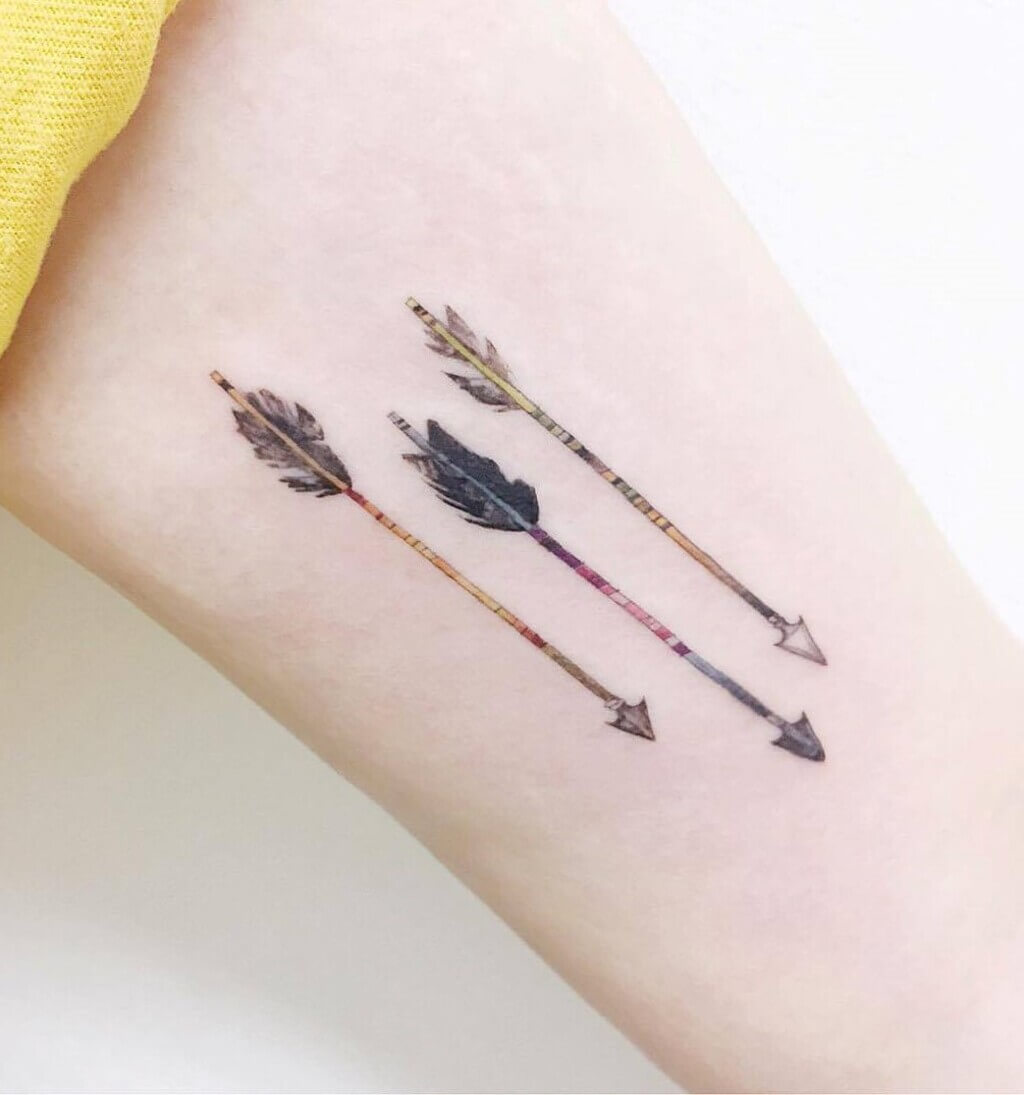 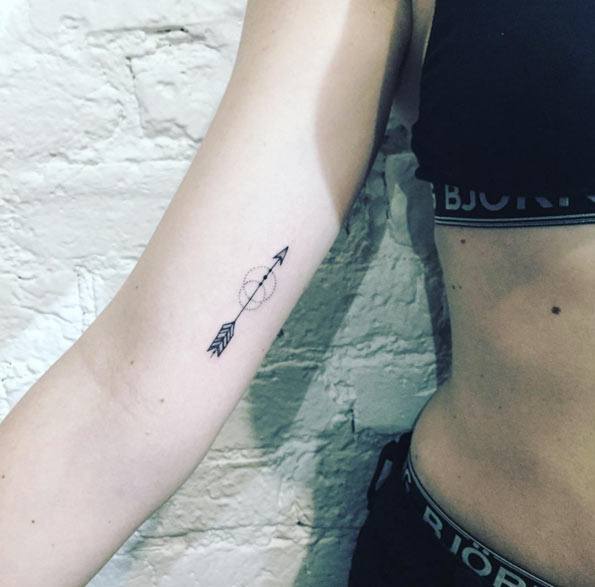 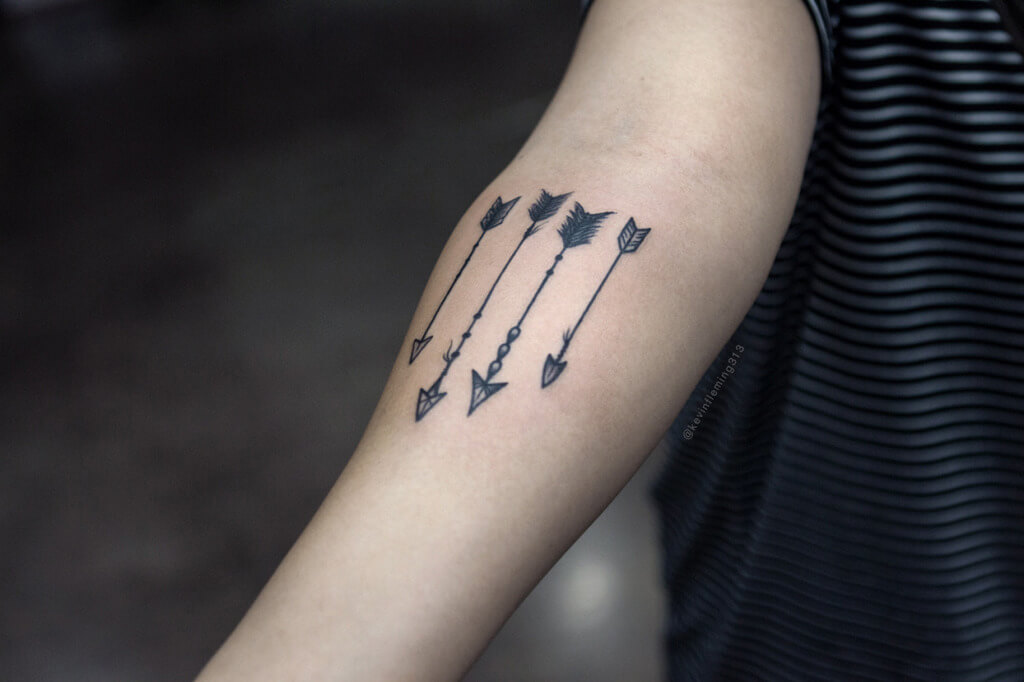 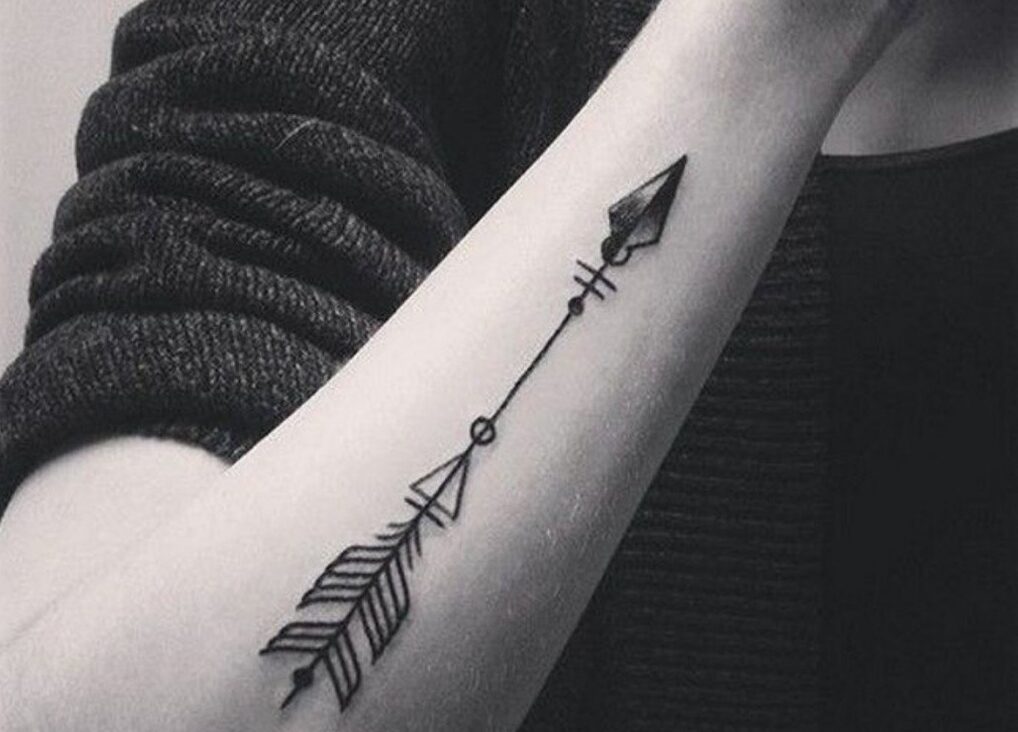 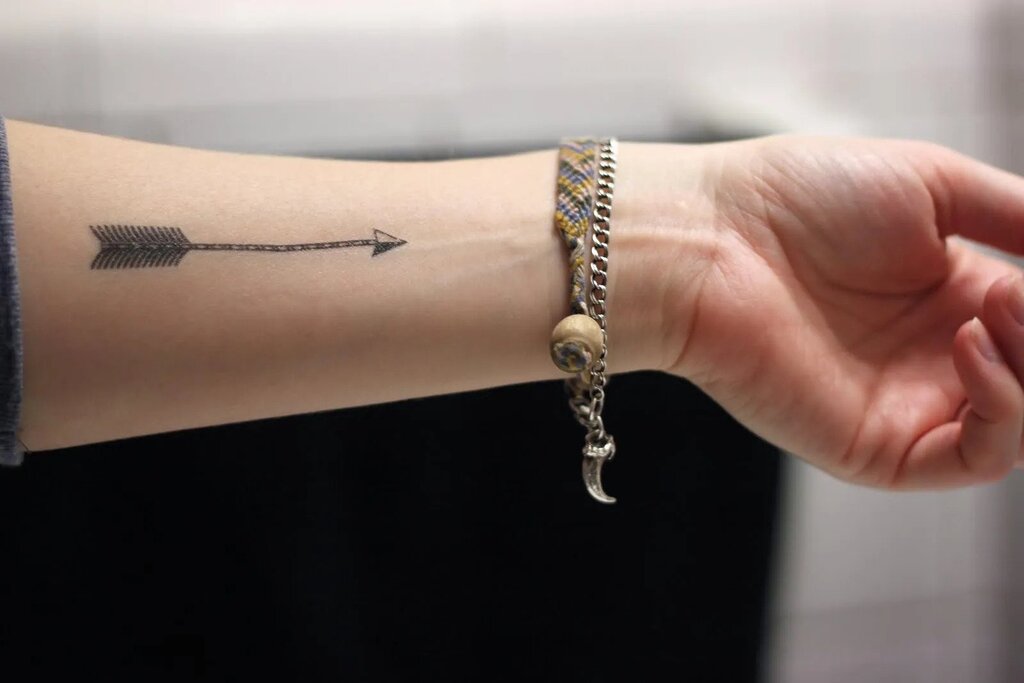 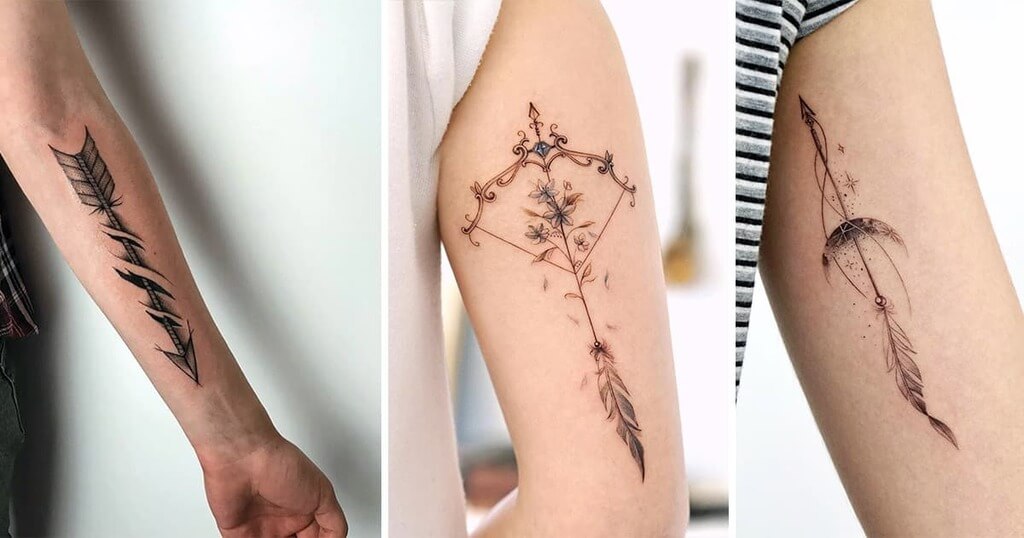 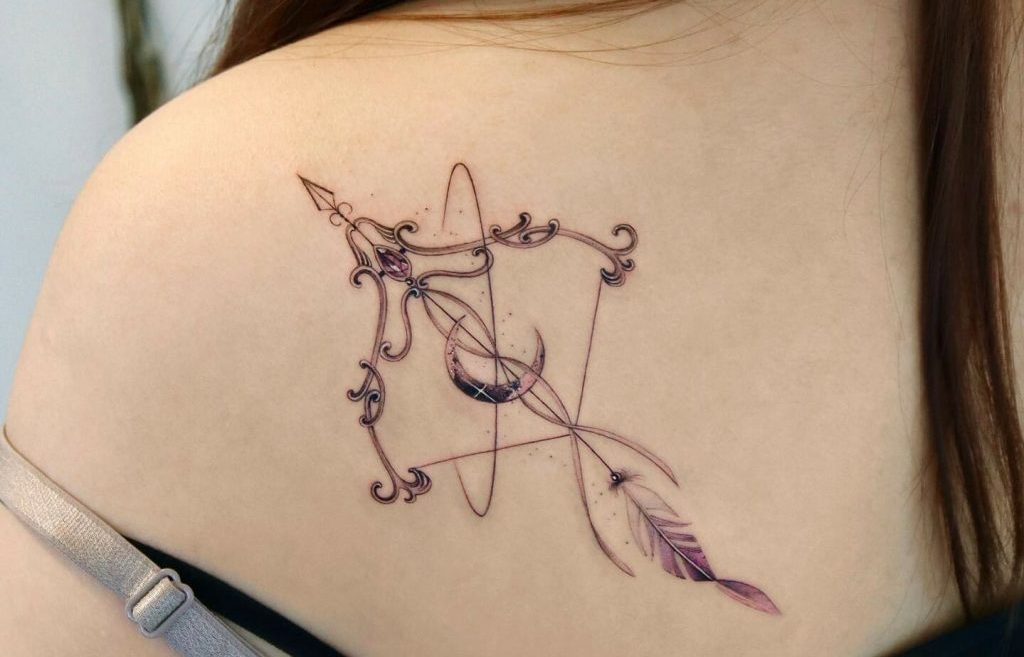 Cheers To Your Knowledge On Arrow Tattoo Meaning!

To wrap up things in a few words, having to care for a new arrow tattoo is rather simple. Each tattoo artist will have their unique set of self-care instructions for your new ink.

Getting an arrow tattoo as a first tattoo is an extremely popular concept these days. Furthermore, the basic design makes the tattoo inexpensive, so you won’t have to spend much money on it. Furthermore, as the arrow design isn’t very sophisticated and engravers won’t have too many issues, and tattoo artists won’t charge you as much.

I hope you have received all the information about arrow tattoos and what the arrow tattoo meaning suggests.

For more tattoo design inspiration and knowledge stay tuned to Fashionterest by subscribing to our newsletter.